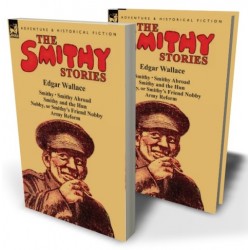 Most readers are familiar with Rudyard Kipling’s ‘Soldiers Three’ stories, and the delightful and enduring tales of Queen Victoria’s ‘hard bargains’ have come to epitomise the character of the British soldier at the time of empire and the Raj in India. Edgar Wallace, who is also famous for his own stories of colonial life—the Sanders stories—was principally a writer of crime and detective fiction. However, he was well aware that the irrepressible spirit of Kipling’s famous rankers would live on, and he wrote his own tales of ordinary British soldiers. Set at a later—and, when first published, contemporary—time, and on a different stage, this substantial collection of the Smithy stories finds our incorrigible hero and his scurrilous band of confederates malingering, scheming and conniving their way through life in the British Army during the First World War. The centenary of the outbreak of the Great War in 1914 is, of course, an ideal occasion for Leonaur to republish these wonderful stories for today’s readers to discover and enjoy.
Leonaur editions are newly typeset and are not facsimiles; each title is available in softcover and hardback with dustjacket.