The Complete Escapades of The Scarlet Pimpernel—Volume 4: Sir Percy Hits Back & A Child of the Revolution

Home » Fiction » Adventure and Historical Fiction » Multi volume sets » The Complete Escapades of The Scarlet Pimpernel—Volume 4: Sir Percy Hits Back & A Child of the Revolution 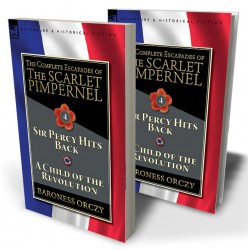 Chauvelin now looked like an animal at bay. Caught in net turning round and round, wildly, impotently; seeking an egress and only succeeding in getting more and more firmly enmeshed. But he kept himself under control nevertheless. He felt the eyes of those three men probing his soul. Exulting over his misery. Hatred all around him. Cruelty. Godet openly hostile, vengeful, with a grievance for his own humiliation; ready to hit back, to demand humiliation for humiliation, and terror for terror. Revenge! My God! who but a fiend could dream of such revenge. And the other two; that fool Danou and that brute Pochart! No actual hostility about them. Only envy: a mad desire to save their own skins, to purchase notoriety, advancement at any price—even at the price of innocent blood.
And as a wild beast turning and turning in the trap will pause from time to time and glare out into the open, which means all its life has stood for until now, so did Chauvelin, with soul enmeshed in vengeance and envy, pause a moment in his mad struggle for freedom. He paused and with wildly dilated eyes gazed upon a swift, accusing vision of all the innocent blood he himself had helped to shed. Those clenched hands of his, on which his gaze for one instant rested, fascinated, how many times had they signed the decree which had deprived a father of his son, a wife of her husband, a lover of his mistress. And through the meshes that tightened round him now, Chauvelin gazing into space saw before his eyes the awful word “Retribution” written in letters of fire and blood.
And seeing the writing on the wall, he felt an immense rage against these men who dared to taunt him, who dared to hit at him, through the one vulnerable spot in his armour of callousness and cruelty. How dared they stand up to him, these miserable creatures whose existence was of less account than that of a buzzing fly? And throwing back his head he gazed upon them all, one after the other, meeting their sneering glance with a bold challenge. How dared they defy him? Him, Chauvelin? The trusted friend of Robespierre, one of the makers of this glorious revolution; one of its most firm props? Now a representative of the National Convention on special mission? There stood the child, his daughter, his little Fleurette, silent, wide-eyed, obviously not fully aware of the terrible position in which she stood: and they dared to hit at her, to accuse her, without rhyme or reason, just in order to hit at him through her.
It was Godet, of course, that vile, incompetent brute: savage and cruel like the fool he was: vengeful for the bad half-hour he had been made to spend in this very room. He must have heard something of what the child had said. At one moment her sweet voice had risen to shrill tones. Oh! what a senseless, mad confession! and he had seized upon it so that he might hit back: have his revenge. But he could prove nothing. It would be one man’s word against another, and he, Chauvelin, representative on special mission, with the ear of all the great men up in Paris, would see to it, that his word carried all the weight. He would deny everything, swear that Godet lied. His was the power, he was more influential, more unscrupulous than most.
If only the child held her tongue! She would if she was assured that her Amédé was in no danger. How thankful he, Chauvelin, was that he had told her the truth this morning. He couldn’t bear to look at her just at this moment, she looking so innocent, so unconscious of danger, but nevertheless he tried to convey to her with eyes and lips the warning to hold her tongue. Chauvelin had been silent for quite a little while; the others thought they had cowed him. In their hearts Pochart and Danou were not a little afraid of him.
A representative on special mission had unlimited power and this Chauvelin was always a crouching beast, ready to snarl and to spring, and they knew well enough how influential he was. But here was a double chance to show their zeal, and to get even with the man whom they had always feared. As for Godet, he had obviously staked everything on this throw. His life was anyhow forfeit; Chauvelin’s threats yesterday had left him no loophole for hope. But here was revenge to his hand, and at worst a powerful lever wherewith to force his enemy’s hand.