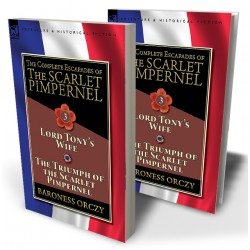 “Father dear,” she contrived finally to say to him, “if you go hence, you will go alone. Nothing will move me from here, because I know that milor will come.”
“Curse you for your obstinacy,” retorted the duc, “you jeopardise my life and yours.”
Then suddenly from the angle of the room where wrangling and fighting were at their fiercest, there came a loud call:
“Look out, Père Lemoine, your aristos are running away. You are losing your last chance of those fifty francs.”
It was Paul Friche who had shouted. His position on the table was giving him a commanding view over the heads of the threatening, shouting, perspiring crowd, and he had just caught sight of M. le Duc dragging his daughter by force toward the door.
“The authors of all this pother,” he added with an oath, “and they will get away whilst we have the police about our ears.”
“Name of a name of a dog,” swore Lemoine from behind his bar, “that shall not be. Come along, maman, let us bring those aristos along here. Quick now.”
It was all done in a second. Lemoine and his wife, with the weight and authority of the masters of the establishment, contrived to elbow their way through the crowd. The next moment Yvonne felt herself forcibly dragged away from her father.
“This way, my girl, and no screaming,” a bibulous voice said in her ear, “no screaming, or I’ll smash some of those front teeth of yours. You said some rich friends were coming along for you presently. Well then! come and wait for them out of the crowd!”
Indeed, Yvonne had no desire to struggle or to scream. Salvation she thought had come to her and to her father in this rough guise. In another moment mayhap, he would have forced her to follow him, to leave milor in the lurch, to jeopardise for ever every chance of safety.
“It is all for the best, father dear,” she managed to cry out over her shoulder, for she had just caught sight of him being seized round the shoulders by Lemoine and heard him protesting loudly:
“I’ll not go! I’ll not go! Let me go!” he shouted hoarsely. “My daughter! Yvonne! Let me go! You devil!”
But Lemoine had twice the vigour of the Duc de Kernogan, nor did he care one jot about the other’s protests. He hated all this row inside his house, but there had been rows in it before and he was beginning to hope that nothing serious would come of it. On the other hand, Paul Friche might be right about these aristos; there might be forty or fifty francs to be made out of them, and in any case, they had one or two things upon their persons which might be worth a few francs—and who knows? they might even have something in their pockets worth taking.
This hope and thought gave Lemoine additional strength, and seeing that the aristo struggled so desperately, he thought to silence him by bringing his heavy fist with a crash upon the old man’s head.
“Yvonne! À moi!” shouted M. le Duc ere he fell back senseless.
That awful cry, Yvonne heard it as she was being dragged through the noisome crowd. It mingled in her ear with the other awful sounds—the oaths and blasphemies which filled the air with their hideousness. It died away just as a formidable crash against the entrance door suddenly silenced every cry within.
“All hands up!” came with a peremptory word of command from the doorway.
“Mercy on us!” murmured the woman Lemoine, who still had Yvonne by the hand, “we are undone this time.”
There was a clatter and grounding of arms—a scurrying of bare feet and sabots upon the floor, the mingled sounds of men trying to fly and being caught in the act and hurled back: screams of terror from the women, one or two pitiable calls, a few shrill cries from frightened children, a few dull thuds as of human bodies falling—It was all so confused, so unspeakably horrible. Yvonne was hardly conscious. Near her someone whispered hurriedly:
“Put the aristos away somewhere, Maman Lemoine—the whole thing may only be a scare—the Marats may only be here about the aristos—they will probably leave you alone if you give them up—perhaps you’ll get a reward—Put them away till some of this row subsides—I’ll talk to Commandant Fleury if I can.”
Yvonne felt her knees giving way under her. There was nothing more to hope for now—nothing. She felt herself lifted from the ground—she was too sick and faint to realise what was happening: through the din which filled her ears she vainly tried to distinguish her father’s voice again.
A moment or two later she found herself squatting somewhere on the ground. How she got here she did not know—where she was she knew still less. She was in total darkness. A fusty, close smell of food and wine gave her a wretched feeling of nausea—her head ached intolerably, her eyes were hot, her throat dry: there was a constant buzzing in her ears.
The terrible sounds of fighting and screaming and cursing, the crash of broken glass and overturned benches came to her as through a partition—close by but muffled.
In the immediate nearness all was silence and darkness.