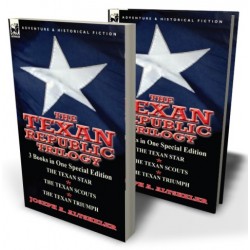 Liberty or Death—the battle for the Republic of Texas

American author Joseph Altsheler was well known for his exciting action stories set against notable periods in the history and wars of the United States of America. This book contains his complete and famous trilogy about the bloody birth of the Republic of Texas. In typical Altsheler fashion, the fictional protagonists struggle through their adventures against a backcloth of real events faithfully described and including the debacle of Goliad, the heroic stand behind the walls of the Alamo and the final victory at San Jacinto. A full cast of real people make appearances—from the major characters of Houston and Santa Anna, to figures of legend including Crockett, Bowie and Travis. Altsheler knew how to craft a rip-roaring adventure suitable for readers of all ages and this is an excellent opportunity to own and read this great series in one substantial and satisfying volume.
Leonaur already publishes Altsheler books about the French and Indian War, the frontier conflicts of the colonial period beyond the Ohio River, the American Civil War, the American Indian Wars and the First World War.
Leonaur editions are newly typeset and are not facsimiles; each title is available in softcover and hardback with dustjacket.

Crockett took a single brief look down the sights and pulled the trigger. The man with the rammer dropped to the earth and the rammer fell beside him. He lay quite still. Crockett seized a second rifle and fired. A loader fell and he also lay still. A third rifle shot, almost as quick as a flash, and a gunner went down, a fourth and a man at a wheel fell, a fifth and the unerring bullet claimed a sponger, a sixth and a Mexican just springing to cover was wounded in the shoulder. Then Crockett remained with the seventh rifle still loaded in his hands, as there was nothing to shoot at, all the Mexicans now being hidden.
But Crockett, kneeling on the parapet, the rifle cocked and his finger on the trigger, watched in case any of the Mexicans should expose himself again. He presented to Ned the simile of some powerful animal about to spring. The lean, muscular figure was poised for instant action, and all the whimsicality and humour were gone from the eyes of the sharpshooter.
A mighty shout of triumph burst from the Texans. Many a good marksman was there, but never before had they seen such shooting. The great reputation of Davy Crockett, universal in the southwest, was justified fully. The crew of the gun had been annihilated in less than a minute.
For a while there was silence. Then the Mexicans, protected by the earthwork that they had thrown up, drew the battery back a hundred yards. Even in the farther batteries the men were very careful about exposing themselves. The Texans, seeing no sure target, held their fire. The Mexicans opened a new cannonade and for another half hour the roar of the great guns drowned all other sounds. But when it ceased and the smoke drifted away the Texans were still unharmed.
Ned was now by the side of Bowie, who showed great satisfaction.
“What will they do next?” asked Ned.
“I don’t know, but you see now that it’s not the biggest noise that hurts the most. They’ll never get us with cannon fire. The only way they can do it is to attack the lowest part of our wall and make a bridge of their own bodies.”
“They are doing something now,” said Ned, whose far-sighted vision always served him well. “They are pulling down houses in the town next to the river.”
“That’s so,” said Bowie, “but we won’t have to wait long to see what they’re about.”
Hundreds of Mexicans with wrecking hooks had assailed three or four of the houses, which they quickly pulled to pieces. Others ran forward with the materials and began to build a bridge across the narrow San Antonio.
“They want to cross over on that bridge and get into a position at once closer and more sheltered,” said Bowie, “but unless I make a big mistake those men at work there are already within range of our rifles. Shall we open fire, Colonel?”
He asked the question of Travis, who nodded. A picked band of Mexicans under General Castrillon were gathered in a mass and were rapidly fitting together the timbers of the houses to make the narrow bridge. But the reach of the Texan rifles was great, and Davy Crockett was merely the king among so many sharpshooters.
The rifles began to flash and crack. No man fired until he was sure of his aim, and no two picked the same target. The Mexicans fell fast. In five minutes thirty or forty were killed, some of them falling into the river, and the rest, dropping the timbers, fled with shouts of horror from the fatal spot. General Castrillon, a brave man, sought to drive them back, but neither blows nor oaths availed. Santa Anna himself came and made many threats, but the men would not stir. They preferred punishment to the sure death that awaited them from the muzzles of the Texan rifles.
The light puffs of rifle smoke were quickly gone, and once more the town with the people watching on the flat roofs came into full view. A wind burst out the folds of the red flag of no quarter on the tower of the church of San Fernando, but Ned paid no attention to it now. He was watching for Santa Anna’s next move.
“That’s a bridge that will never be built,” said Davy Crockett. “‘Live an’ learn’ is a good sayin’, I suppose, but a lot of them Mexicans neither lived nor learned. It’s been a great day for ‘Betsy’ here.”
Travis, the commander, showed elation.
“I think Santa Anna will realize now,” he said, “that he has neither a promenade nor a picnic before him. Oh, if we only had six or seven hundred men, instead of less than a hundred and fifty!”
“We must send for help,” said Bowie. “The numbers of Santa Anna continually increase, but we are not yet entirely surrounded. If the Texans know that we are beleaguered here they will come to our help.”
“I will send messengers tomorrow night,” said Travis. “The Texans are much scattered, but it is likely that some will come.”
It was strange, but it was characteristic of them, nevertheless, that no one made any mention of escape. Many could have stolen away in the night over the lower walls. Perhaps all could have done so, but not a single Texan ever spoke of such a thing, and not one ever attempted it.
You may also like