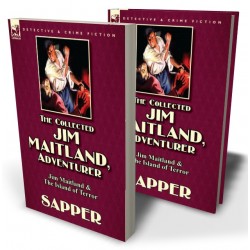 The going was good: evidently the path was one in frequent use. To start with it ran quite straight: then it began to twist and jink though the general direction remained the same. And after a while even the sound of the surf died away: the silence seemed to press on them like a blanket.
At length they reached a small clearing from which four other tracks led out like the spokes of a wheel, and Jim paused. None of them seemed to be a direct continuation of the one they had come along, and it was a toss-up which to take. The compass was well-nigh useless, as they had only the vaguest idea of their present position, but Jim finally selected one that ran a little south of west. Then having placed a conspicuous fern to mark the path they had come by they started along the new one.
The pace Jim set was as fast as he dared, consistent with safety. He had not exaggerated when he spoke of very grave danger, and he realised that it would be graver still if darkness overtook them while they were still in the forest. And so, whilst he scouted with the utmost caution whenever he came to a bend, he almost ran along the straight stretches. The reassuring thing was the continued silence, which seemed to indicate that the other occupants of the forest were asleep. And he was sufficiently confident of his powers of stalking to hope that, if that were so, he would be able, if they had the luck to find them, to get near enough to see what manner of thing it was they were up against, and then get away again in safety. There might even be a bare possibility of rescuing the Brazilian if he was still alive, but that could only be decided later.
Such was the general plan he decided on as they pressed forward, when there came a sudden startling interruption. From away to the left a ship’s siren blared three times. They halted abruptly, and Jim stared at his cousin.
“I wonder who that is,” he said thoughtfully.
“Probably that ship we saw from the top of the hill,” answered Percy.
The siren wailed again, and Jim frowned.
“What are they making that infernal din for?” he cried. “Sounds to me as if they were signalling. Percy, I wonder if that is Miguel’s yacht come earlier than we expected. If so. . .”
He did not complete the sentence, for a further interruption occurred, this time much nearer at hand. The bell they had heard that morning began to toll, and with it the sleeping forest awakened to life. From all around them came the sounds of movement, and Jim seized his cousin by the arm.
“In here, for your life,” he muttered, forcing his way off the track into the undergrowth. “We’re right in the middle of them.”
The bell went on tolling, though its sound was almost drowned by the noises around them. And once or twice a hoarse bellow, that was half roar, half grunt, rang out.
They cowered down behind some giant ferns: some of the things were close to them. But so dense was the vegetation that they could see nothing. And after a while the sounds grew fainter and fainter until they died away in the distance. The bell ceased tolling: silence settled once again.
At length Jim straightened up and stepped out into the path.
“That was rather nearer than I liked,” he remarked. “It is a damned lucky thing for us, old lad, that they were asleep when we arrived.”
“What do you make of it, Jim?” said his cousin.
“The bell was obviously a warning signal,” he answered, “which was rung when the siren was heard. And now they have gone off to investigate.”
“But what are they?” cried Percy.
“You can take it from me,” said Jim gravely, “that whatever they are, it is a question of running no risks. But since we are here, and the owners of the place appear to have gone, we may as well explore a little further.”
They moved on cautiously: it was more than likely that all of them had not gone, and that a guard had been left. And then, quite unexpectedly the track opened out into a big clearing.
“Good God!” muttered Jim, “look at that.”
The space was some thirty yards square, with several openings similar to the one they stood in. Above them the trees met, seemingly a solid ceiling of scarlet, splashed here and there with the vivid blues and yellows of gaudily coloured parrots. Shafts of sunlight shone through, dappling the sides with every shade of green: it was a riot of colour that would have made an artist rave. But the two men who stood motionless at the entrance hardly noticed it: they had eyes only for what stood in the centre of the ground.
Hanging from a frame was a brass bell, which was still swinging gently though no sound came from it. And chased on the bell in black lettering they could read the words—S.S. Paquinetta. Underneath it, between the two uprights a man was sitting, a man who did not stir. His knees, lashed together with some fibrous stuff, were drawn up: his hands were stretched out in front of him. His head lolled sideways: his face, so distorted with agony and terror, that the features were almost unrecognisable, stared at them. It was Lopez, the Brazilian, and he was dead.
Books from this set
You may also like