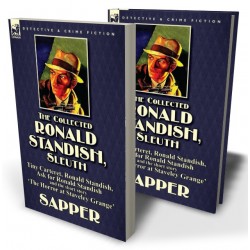 “I’ve seen Inspector Crawley myself,” said Ronald, “and I told him we don’t want an army of men. The small fry don’t count when all is said and done, and if we have posses of policemen marching up the road we’ll be stung. So he’s sending half a dozen of his best men by a roundabout route and he’s coming with himself. In fact—here he is.”
The two inspectors shook hands, and then Ronald glanced at his watch.
“Time we went,” he said. “Put on your rubbers, Bob, and bring your gun, in case it’s wanted.”
I rejoined them a few minutes later, and we all got into a waiting taxi.
“Stop half a mile short of Holmlea,” Ronald told the driver as we started off.
And now I was beginning to feel excited. That something big was afoot was obvious, though what it was I had no idea. But a man in McIver’s position would not have come post-haste from London for some trifling larceny.
“’Ere you are, gents,” said the driver, pulling up. “’Olmlea’s just round the bend there in front of you.”
We paid him off, and then Ronald took charge.
“Got to do a bit of trespassing,” he said, “for we can’t possibly go along the road. Follow me. I explored the route this evening.”
He turned into some undergrowth, and silently led the way. A slight wind was stirring the branches of the trees, and twice during our walk a motor-bus rumbled past on the road a few yards away. The night was dark, and there was no moon, which made the going difficult, but at length he stopped and we closed up on him.
“There’s the house,” he whispered, “just in front of us. I’ve got the key of the front door, but the difficulty is going to be in getting over this bit of open. They may have scouts round the place.”
“You get the door open, Mr. Standish,” muttered McIver “then we’ll dodge across singly.”
Like a shadow Ronald vanished, and a minute later a faint click told us he had been successful. Then one by one we flitted across the lawn and joined him in the hall.
The house was deathly silent. Not even the ticking of a clock could be heard.
“Be careful how you walk,” whispered Ronald. “There may still be buckets and things about.”
On tiptoe we followed him, until we found ourselves in a small vestibule leading off the hall. In front of us were steps going down to the kitchen premises, which we could dimly see by the light of a street lamp outside.
And then commenced an eerie vigil. No one spoke. No one even whispered. We merely stood and waited—I, at any rate, with no idea what for. And it was just as very faintly in the distance we heard a church clock chime midnight that a sudden sharp click came from below. I felt Ronald stiffen. The moment had come.
Scarcely breathing, we stood there. Stealthy footsteps were coming up the stairs. They passed our door, and continued up the next flight. And it was then that I became aware for the first time of a peculiar rhythmical noise that seemed to shake the whole house. Thump: thump: thump—it went on without cessation, just as if some big engine was working.
But another sound distracted my attention. The bath tap had been turned on above. The splash of water was clearly audible, though it did not prevent us hearing a creak on the stairs as the mysterious visitor descended again.
“Catch him as he passes us,” breathed Ronald. “Silently, if possible.”
But that was not to be. In the dim light we impeded one another, and the man as we sprang on him let out one wild shout before a heavy blow on the back of his head stunned him.
“Move!” shouted Ronald. “Before they get the opening closed.” We fell down the kitchen stairs, and into the scullery. Through a hole in one wall light was streaming, and we dashed through to find ourselves in a long passage. And the thumping noise had ceased.
We raced along and burst open a door at the end. And then things happened. I had a fleeting vision of a hall with an oil lamp, swinging from the ceiling, of two furious-looking men and a wizened-up old woman standing underneath it. Then something red-hot seared through my chest, and I felt myself falling into blackness, punctuated by the crack of revolver shots.
Books from this set
You may also like