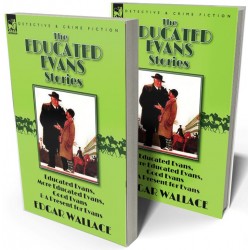 Edgar Wallace was a prolific author of crime, adventure and humorous stories, whose best known creations include The Four Just Men, Sanders of the River, and J. G. Reeder. Although Wallace wrote many ‘stand alone’ novels it is, perhaps, for his series based material—always popular with readers—that he remains best known. Leonaur has collected many of these series into good-value omnibus editions. The Educated Evans stories combine Wallace’s talent for humour with his hallmark detective story themes. The eponymous principal character is a London racing tipster. Garrulous and delightfully ignorant of most of the subjects about which he professes to have knowledge, Evans provides the comic foil for the towering figure of ‘The Miller,’ a formidable police detective named for his perpetual habit of chewing upon a length of straw. Together the pair form an uneasy partnership as they undertake various adventures in the worlds of racing and petty criminality. Educated Evans actually found his way to the cinema screen portrayed by the popular British comedian Max Miller.