The Complete Ringer: the Adventures of Fiction’s Nemesis and Master of Disguise—The Ringer & Again the Ringer 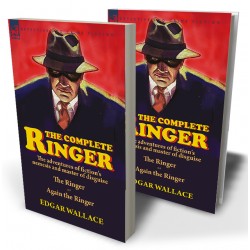 Practically everyone who has an appetite for the mystery, crime and thriller novels which were offered to the reading public during the inter-war years of the 20th century will be familiar with the substantial body of work produced by British author, Edgar Wallace. His imaginative penmanship brought forth, ‘The Four Just Men’, ‘Sanders and Bones’, ‘J. G. Reeder’, ‘Inspector Elk’ and many others. However, it was the principal character of the stories contained in this book that many authorities on the genre believe established Wallace in the highest echelon of the mystery writers of his time. The Ringer is an unrepentant anti-hero and vigilante of the most extreme type—for this nemesis does baulk at murdering his villainous victims. The Ringer is, in reality, Henry Arthur Milton, ruthless master of disguise, and it is the job of Inspector Wembury of Scotland Yard to catch him and bring him to justice, although that is easier said than done! Despite his popularity with an avid readership, ‘The Ringer’ only appeared in two books, the ‘The Ringer’ and its sequel ‘Again the Ringer’ which is a short story collection in which, of course, The Ringer brings a diverse number of deserving reprobates to their just desserts. Both books appear in this special two-in-one good value Leonaur edition.

As a matter of fact, he didn’t really think at all; he was in that condition of horror and shock which inhibits thought. He could stare, pale-faced, at this lovely being in her self-made dishevelment, and when he did speak his words were ludicrously inadequate.
“Why, you—nasty creature!” he squeaked. “I didn’t! I just kissed you. I think you’re foul to—to make such a suggestion—I really do!”
Louise had no more regard for youthful horror than for middle-aged vituperation. She stated her terms for the second time.
“Fifteen thousand? I haven’t got fifteen thousand pence——”
And then he remembered and gasped. That morning his father-in-law-to-be had placed to his credit exactly that sum. Bay was buying a partnership in an underwriting business—thirty thousand was the purchase price. Pa St. Main’s half was to come on the morrow. Bay was to hold a one-third interest of the whole. Louise had very accurate information about the financial standing of her cases.
“Don’t talk nonsense,” she said. “I know your credit to a penny. You have over sixteen thousand in the Piccadilly branch of the Western Bank.”
It was now that Bay St. Main’s brain began to function, and he reviewed dismally the possible items of embarrassment. Item No. 1 was St. Main Senior, who already leaned towards devoting his fortune to the establishment of Sailors’ Institutes—he had in his early youth served before the mast. Item No. 2 was Lord Rendlesham, a High Churchman who virtuously deplored the laxity of the age. Item No. 3 was Inez Rendlesham, very lovely and austere and intolerant of vulgarity. It was difficult to discover any expression of popular activity, from cross-word puzzles to shingling, that did not come into that category.
And, thinking, Mr. St. Main grew paler and paler.
Eventually he signed the cheque and waited, imprisoned with the enchantress, until the money was drawn. During that time, he told her incoherently what he thought of such women as she. Lou, who had heard everything that could be said on the subject much more eloquently put —Sir Ronald had once moved the Court of Arches to tears—listened and did not listen.
She was too bored to tell him just what was her point of view. She could have recited her formulae without thinking. Men are born robbers, unscrupulous, remorseless, pitiless. She stood for avenging womanhood. Men must pay sometimes. Etcetera. What she did say was:
“Yours is a sad case—you might apply to the police or you might find The Ringer and tell him all about it. I’d love to meet him.”
Which was very foolish of her.
The time came for the return of the maid and his release. He hurled at her one tremulous malediction, but he did not invent the fiction that he was a close personal friend of the chief commissioner. For this she was frankly grateful.
******
Mr. Bayford St. Main went out into the busy street and walked aimlessly, unconsciously westward. To whom should the news be broken? To his father? He closed his eyes and shuddered at the thought. To Rendlesham? Picturing Miss Rendlesham’s comments, he had a vision of a broken icicle—irregular and frigid lengths of speech, cold, cutting-edged.
His mind searched frantically for rich relations, for wealthy and philanthropic friends. There was nobody in the wide world to whom he could appeal.
“Why—Mr. St. Main, I declare!”
Bay had turned and blinked owlishly at the man who had laid an almost affectionate hand on his arm.
“Hallo . . . . Mr.—um—eh—Marksen, of course.” Bay gripped at the murmured reminder, though who Mr. Marksen was—“Oh, yes, the—um—I hope you weren’t fearfully ill after that car business?”
He made an instant appraisement of his companion. Mr. Marksen might be very rich—some of these exploring johnnies are: they find buried cities and unbury them, and dig up all sorts of gold things. Unless, of course, they go exploring the North Pole, when they have to be supported by public subscriptions. He looked rather like that kind in his well-worn golf suit, his foul and massive briar pipe, his gold-rimmed spectacles, and little yellow moustache. He had grown the last since they last met, thought Bay. Here, however, he was wrong. Mr. Marksen had the moustache before the accident, but had lost it in the ditch—and his spectacles.
“I could have sworn I saw you coming out of Lethley Court. I used to have a friend who lived in that hotel, and somebody was telling me the other day that—um—quite a notorious—um—person lived there. A lady called . . . . well, well, well, it is no business of mine.”
Bay looked at his companion aghast.
“A—a lady?” he stammered.
“More or less,” said Mr. Marksen, “more or less. A friend of mine got into serious trouble over—um—a perfectly innocent folly, and I was able to help him; but you couldn’t be interested——”
Bay was more than interested—he was enthralled. “Come round to my flat, will you?” he asked urgently.
Mr. Marksen looked at his watch and hesitated before he said “Yes.”