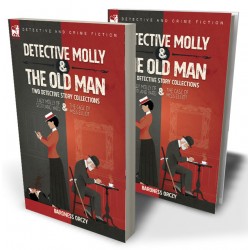 Baroness Orczy will be forever associated with her tales of the Scarlet Pimpernel—that 18th century English, ‘devil may care’ gentleman of the French Revolutionary period whose numerous adventures involved saving innocents from the sinister Citizen Chauvelin’s clutches and the blade of the guillotine. However, in common with many authors of her time Baroness Orczy wrote widely in various genres of fiction, including the excellent volumes of detective stories which have been brought together to create this unique, two volume Leonaur set. The first collection, ‘Lady Molly of Scotland Yard’ contains 12 stories concerning an early female detective, Molly Robertson-Kirk. First published in 1910 the adventures of murders and other dastardly deeds are narrated by Molly’s assistant, Mary Granard. The second collection introduces Orczy’s unique ‘Old Man in the Corner’. The mysterious ‘old man’ is frequently found solving mysteries in conversation with a reporter, Polly Burton, whilst sitting in London’s A.B.C. Tea Rooms. This first collection of the ‘Old Man in the Corner’ mystery series is titled ‘The Case of Miss Elliott’, the second and third collections, ‘The Old Man in the Corner’ and ‘Unravelled Knots’, can be found together in volume 2 of this Leonaur edition.

An elderly, somewhat florid, woman stood before me attired in a dingy-coloured dressing-gown. She was pointing towards my own bedroom door, implying her desire to accompany me to my room. Remembering my dear lady’s parting injunctions, I nodded in acquiescence. She followed me, after having peered cautiously up and down the passage.
Then, when the door was duly closed, and she was satisfied that we were alone, she said very abruptly:
“Miss Granard, tell me! you are poor, eh?—a paid companion to your rich friend, what?”
Still thinking of Lady Molly’s commands, I replied with a pathetic sigh.
“Then,” said the old lady, eagerly, “would you like to earn fifty thousand francs?”
The eagerness with which I responded “Rather!” apparently pleased her, for she gave a sigh of satisfaction.
“You know the story of my sister’s will—of the clock?” she asked eagerly: “of your friend’s role in this shameless business?”
Once more I nodded. I knew that my lady had guessed rightly. This was the Marquise de Terhoven, planted here in the convent to gain my confidence, to spy on Lady Molly, and to offer me a bribe.
Now for some clever tactics on my part.
“Can you prevent your friend from being at the château tomorrow before one o’clock?” asked the marquise.
“Easily,” I replied calmly.
“How?”
“She is ill, as you know. The doctor has ordered her a sleeping draught. I administer it. I can arrange that she has a strong dose in the morning instead of her other medicine. She will sleep till the late afternoon.”
I rattled this off glibly in my best French. Madame la Marquise heaved a deep sigh of relief.
“Ah! that is good!” she said. “Then listen to me. Do as I tell you, and tomorrow you will be richer by fifty thousand francs. Come to the château in the morning, dressed in your friend’s clothes. My son will be there; together you will assist at the opening of the secret doors, and when my son has wound up the old clock himself, he will place fifty thousand francs in your hands.”
“But Monsieur le Curé?” I suggested tentatively.
“He is ill,” she replied curtly.
But as she spoke these three words there was such an evil sneer in her face, such a look of cruel triumph in her eyes, that all my worst suspicions were at once confirmed.
Had these people’s unscrupulous rapacity indeed bribed some needy country practitioner to put the curé temporarily out of the way? It was too awful to think of, and I can tell you that I needed all my presence of mind, all my desire to act my part bravely and intelligently to the end, not to fly from this woman in horror.
She gave me a few more instructions with regard to the services which she and her precious son would expect of me on the morrow. It seems that, some time before her death, Miss de Genneville had laid strict injunctions on two of her most trusted menservants to remain in the château, and to be on the watch on the eventful 20th day of September of this year, lest any serious violence be done to the English lady or to the curé. It was with a view to allay any suspicion which might arise in the minds of these two men that the marquis desired me to impersonate Lady Molly tomorrow, and to enter with him—on seemingly friendly terms—the room where stood the monumental clock.
For these services, together with those whereby Lady Molly was to be sent into a drugged sleep whilst the theft of the will was being carried through, I—Mary Granard—was to receive from Monsieur le Marquis de Terhoven the sum of fifty thousand francs.
All these matters being settled to this wicked woman’s apparent satisfaction, she presently took hold of both my hands, shook them warmly, and called me her dearest friend; assured me of everlasting gratitude, and finally, to my intense relief, slipped noiselessly out of my room.