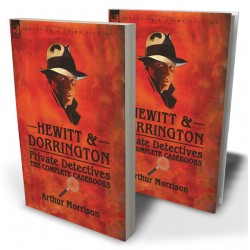 A bumper helping of the detective stories of Arthur Morrison

British author, Arthur Morrison was a writer and journalist principally known for his authoritative work on Japanese art, novels of working class life in the East End of London and collections of detective fiction featuring his two well-known characters, the private investigators Martin Hewitt and Horace Dorrington. Martin Hewitt, Morrison’s first detective creation, has been described by a critic as ‘a low key, lower class version of Sherlock Holmes’, which allows more latitude for the character than it imposes limitations though it places him squarely in the heroic mould. By contrast Horace Dorrington has been described as ‘respected but deeply corrupt’. This anti-hero is an ‘unrepentant sociopath who is willing to resort to theft, fraud, blackmail or even murder’ to earn his dishonest living. All those considerations offer, of course, highly encouraging prospects of reading enjoyment for aficionados of crime fiction. This substantial Leonaur edition contains all the Hewitt and Dorrington stories in one volume. Morrison was elected a member of the Royal Society of Literature in 1924. When he died in 1945 he left his art collection to the British Museum.

Far to the right, on the topmost coping of the front wall, I could see a crouching figure. I saw it rise to its knees, and once more raise an arm to take aim at Hewitt; and then, with a sudden cry, another human figure appeared from behind the coping and sprang upon the first. There was a moment of struggle, and then the rotten coping crumbled, and down, down, came bricks and men together.
I sickened. I can only explain my feeling by saying that never before had I seen anything that seemed so long in falling as those two men. And then with a horrid crash they struck the broken ground, and the pistol fired again with the shock.
We reached them in a dozen strides, and turned them over, limp, oozing, and lifeless. And then we saw that one was Mayes, and the other—Victor Peytral!
We kept no silence now, but Plummer blew his whistle loud and long, and I fired my revolver into the air, chamber after chamber. Styles started off at a run along the path towards the town lights, to fetch what aid he might.
But even then we had doubt if any aid would avail Mayes. He was the under man in the fall, and he had dropped across a little heap of bricks. He now lay unconscious, breathing heavily, with a terrible wound at the back of the head, and Hewitt foretold—and rightly—that when the doctor did come he would find a broken spine. Peytral, on the other hand, though unconscious, showed no sign of injury, and just before the doctor came sighed heavily and turned on his side.
First there came policemen, and then in a little time a hastily dressed surgeon, and after him an ambulance. Mayes was carried off to hospital, but with a good deal of rubbing and a little brandy, Peytral came round well enough to be helped over the Marshes to a cab.
The trap which had been laid for Hewitt was simple, but terribly effective. The floor above the hall—loose and broken everywhere—was supported on rafters, and the rafters were crossed underneath and supported at the centre by a stout beam. The rafters had been sawn through at both ends, and the rotten floor had been piled high with broken brick and stone to a weight of a ton or more. The end of a loose beam had been wedged obliquely under the end of the one timber now supporting the whole weight, so that a pull on the opposite end of this long lever would force away the bricks on which the beam rested and let the whole weight fall. It was the jar of the beam and the fall of the first few loose bricks that had so far warned Hewitt as to enable him to leap from under the floor almost as it fell.
Peytral’s sudden appearance, when we had time to reflect on it, gave us a suspicion as to some at least of the espionage to which Hewitt had been subjected—a suspicion confirmed, later, by Peytral himself after his recovery from the shock of the fall. For fresh news of his enemy had re-awakened all his passion, and since he alone could not find him, he was willing enough to let Hewitt do the tracking down, if only he himself might clutch Mayes’s throat in the end. This explained the “business” that had called him away after the Barbican stronghold had been captured; finding both Hewitt and Plummer somewhat uncommunicative, and himself somewhat “out of it,” he had drawn off, and had followed Hewitt’s every movement, confident that he would be led to his old enemy at last.
What I had told him of the cypher message had led him to hunt out Channel Marsh in the afternoon, and to return at midnight. He, of course, regarded the message, as I did myself at the time, as a perfectly genuine instruction from Mayes to Sims, and he came to the rendezvous wholly in ignorance as to what Hewitt was doing, and with no better hope than that he might hear something that would lead him in the direction of Mayes. He had entered the marsh after dark from the upper end, and had lain concealed by the other channel till near midnight; then he had crept to the rear of the ruin and climbed to where an opening seemed to offer a good chance of hearing what might pass in the hall. He had heard Hewitt approach from the front, and the crash that followed. The rest we had seen.
You may also like