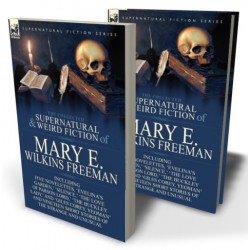 Weird tales from the heartland of New England

Mary Eleanor Wilkins Freeman was a highly regarded and prominent 19th century American author. She began writing as a teenager to assist in supporting her family, and her pivotal career moment came when she became secretary to Oliver Wendall Holmes who, among other achievements, was acclaimed as one of the most outstanding American poets of his generation. Freeman writing abilities now developed rapidly, and as well as poetry, she displayed a particular talent for the crafting of short fiction; this led to her becoming an exponent of the supernatural tale. Freeman spent virtually all her life in Massachusetts and Vermont, and the rural flavour of New England permeates her work, giving it a distinctive style and canvas instantly recognisable as her own. This very substantial Leonaur collection of Mary Wilkins Freeman’s fiction of the uncanny includes ‘Evelina’s Garden,’ ‘Silence,’ ‘The Love of Parson Lord,’ ‘The Buckley Lady,’ ‘Giles Corey, Yeoman’ and many more stories of the strange and unusual.
Leonaur editions are newly typeset and are not facsimiles; each title is available in softcover and hardback with dustjacket.