The Collected Supernatural and Weird Fiction of Fitz-James O’Brien: Thirty-Seven Short Stories of the Strange and Unusual Including ‘From Hand to Mouth’, ‘The Legend of Barlagh Cave’, ‘The Other Night’, and Eight Poems

Home » Fiction » Supernatural and Horror Fiction » American Authors » The Collected Supernatural and Weird Fiction of Fitz-James O’Brien: Thirty-Seven Short Stories of the Strange and Unusual Including ‘From Hand to Mouth’, ‘The Legend of Barlagh Cave’, ‘The Other Night’, and Eight Poems 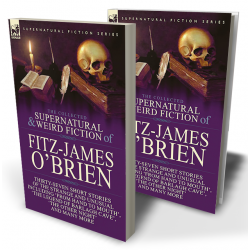 Writer, soldier and innovator in the fiction of the weird and other worldly

This well regarded author of weird and supernatural tales was born in Cork, Ireland in 1826. Originally Michael O’Brien it is known he had journalistic experience and had possibly served in the British Army. Probably to ensure distinction he changed his name to Fitz-James O’Brien and emigrated to the United States of America in 1852. There he contributed writings to a number of periodicals including ‘The Lantern’, ‘The Home Journal’, ‘The New York Times’, ‘Harper’s Magazine’, ‘Vanity Fair’ and others. The ‘Atlantic Monthly’ published what is possibly most famous story, ‘The Diamond Lens’, a tale that was admired for its quality by H. P. Lovecraft. O’Brien’s ‘From Hand to Mouth’, 1858, has been described as ‘the most striking example of surrealistic fiction to pre-date ‘Alice in Wonderland’. O’Brien also penned early, short science fiction tales of robot rebellion and invisibility. At the outbreak of the American Civil War he joined the federal cause enlisting initially in the 7th New York National Guard before being promoted to the staff of General F. W Lander. He was severely wounded in early 1862, during a skirmish with Confederate forces, and though he lingered for some time he eventually died of tetanus at Cumberland in Maryland. This very substantial collection of O’Brien’s fiction contains thirty-seven short stories of the strange and unusual including ‘From Hand to Mouth’, ‘The Legend of Barlagh Cave’, ‘The Other Night’ and Eight Poems Including ‘The Ghost’, ‘Sir Brasil’s Falcon’ and ‘The Lost Steamship’.

How long he slumbered remains to this day a mystery, and probably ever will do so. But when he awoke all was still and quiet as the interior of the, Theban tombs; the gallery was entirely deserted, and the moon was pouring a flood of light through the windows, which fell upon the statues and remains, rendering them still more cold and ghastly.
In an instant the truth broke upon the unhappy antiquary; he had been overlooked when the museum was cleared at seven o’clock, and was locked in—bolted, barred, almost hermetically shut up in the gallery, in the most remote part of the building, with nothing but stony monsters and crumbling mortality for his associates! Chilled to the heart with terror, despair, and the reaction of his previous excitement, he started from his corner with the intention of trying the doors, when his movement was arrested by the chime of a clock. He knew the sound well; it was the bell of St. George’s, Bloomsbury, and it proclaimed the hour of twelve. And he was there alone-—alone, at midnight, in the Egyptian chamber of the British Museum!
In a frenzy of terror, he rushed towards the large doors, in the hope of finding them open; but they were last closed, and he rattled the handles until the whole building rang with the echoes. Mark! what was that sound? The echo had died away, and was now renewed, although he had desisted from his impotent attempts to gain some mode of egress. it sounded from above, and now came nearer and nearer, louder and louder, like the deadened and regular beat of muffled drums. There were footsteps too—he could plainly distinguish them, in audible progression, coming downstairs.
And now a fearful spectacle met his horrified gaze. The immense marble scarabaeus on the floor of the gallery vibrated with incipient animation; then it stretched forth its huge feelers and opened its massy wings, like a newly born insect trying the properties of its novel limbs; and next, with the heavy cumbrous motion of a tortoise, it crept across the floor, throwing back the moonbeams from its polished surface, towards the principal entrance of the gallery. Tramp, tramp,tramp—onward came the noise as of a great assembly, the drums still keeping up their monotonous accompaniment, and at last they approached close to the door, which quivered immediately afterwards with three loud knocks upon its panels from without.
As the hapless Mr. Grubbe shrank still further into the recess, the large beetle scuffled nearer to the door, and then, raising one of its hideous feelers, it turned the handle. The gigantic granite first moved by itself towards the entrance, and repeated the signal on the panels; and, at the last blow, a sound like the low rumbling of thunder echoed through the edifice, and the doors flew open, admitting a glare of purple light, that for a few moments blinded the learned intruder, whilst on either side the Memnon and the Sphynx retreated hack against the wall, to allow room for the dismal cortége that approached.
The whole collection of mummy-cases in the rooms above had given up their inmates, who now glided down the staircase, one after another, to join their ancient compatriots of the gallery below, lifting up the covers of their painted tombs, and stretching forth their pitched and blackened arms to welcome them. And next, the curious monsters with the birds’ heads, who, up to this moment, had remained patiently sitting against the side of the room with their hands upon their knees, rose courteously to salute their visitors.
The light which filled the apartment, although proceeding from no visible point, grew brighter and brighter until it assumed the brilliancy of oxyhydrogen, and when the last of the dusty and bandaged guests had arrived, the doors closed violently, and the orgies began. The figures in the pictures became animated and descended from the tablets, being by far the most attractive portion of the company, either male or female, as they were semblances of life, bearing amphorae of the choicest wine from the vineyards of Memphis; strange birds in long striped tunics, and stranger creations, whose shapes inherited an attribute of every class of the animal kingdom, acted as attendants, and obsequiously wailed upon the superior deities; whilst the greatest feature of the gallery, the mystic, awe inspiring Memnon, moved in stately progress to the end of the room, and commenced pouring forth that wondrous harmony with which at sunrise and twilight he welcomed his early worshipers.
Then commenced an unearthly galopade—a dreary carnival of the dead, to the music of their master, accompanied by the strange sounds of instruments brought by the mummies most inclined to conviviality, from the glass-cases upstairs. But the strangest sight in the whole spectacle was the curious way in which Mr. Grubbe, despite his fears, perceived that they mingled ancient with modern manners, when the dance came to an end.
Some of the animated Egyptians betook themselves to pipes and beer; others brought large aerolites from the different rooms and began to play at ninepins with the inferior household gods of blue glazed clay; one young Memphian even went so far as to thrust an enormous hook, as big as an anchor, through the body of a scarabaeus, and then spin him at the end of a rope about the room; and, finally, they wheeled a sarcophagus into the centre of the gallery, and filled it with what Mr. Grubbe’s nose told him was excellent mixed punch, which they tippled until the eyes of Memnon twinkled with conviviality, as he snuffed up the goodly aroma; and at length, forgetting his dignity altogether, volunteered to play the Aurora waltzes (in compliment of course to his mother) out of his head.