The Collected Supernatural and Weird Fiction of R. H. Benson: One Novel ‘The Necromancers’ and Twenty-Eight Tales of the Strange and Unusual 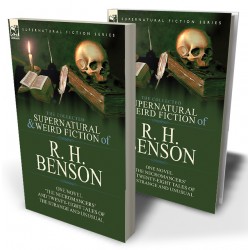 The collected supernatural tales of a famous literary priest

Robert Hugh Benson was one of the three famous, literary Benson Brothers who, in addition to their other occupations, developed a taste for penning stories of the ghostly and weird. Born in 1871, one of six siblings and the son of an Archbishop of Canterbury, R. H. Benson’s ghostly fiction has certainly taken (together with the comparable work of brother, A. C. Benson) a subordinate place to the considerable cannon of work in the genre produced by a third brother, E. F. Benson, who was also a well-regarded author of other works including the humorous ‘Mapp and Lucia’ stories of upper-middle class ‘one-upmanship’. Robert Benson was originally ordained a priest in the Church of England in 1895, but unusually became a Catholic priest in 1904. He nevertheless continued to write prolifically on a number of subjects which included religious matters, works of historical fiction and children’s stories. Particularly highly regarded was ‘Lord of the World’ (1907) which is considered to be the first modern dystopian novel. His supernatural fiction, which despite its comparative obscurity is well worth the time of aficionados of the golden age of the genre, was principally gathered in two collections, ‘The Light Invisible’ and ‘A Mirror of Shallot’. Selected stories have previously been combined with those of A. C. Benson in single volumes, but Leonaur has elected to publish the collected supernatural fiction of the brothers individually as they undoubtedly merit. Robert Benson died in 1914 aged 42 years of pneumonia.