The Collected Supernatural and Weird Fiction of A. C. Benson: One Novel ‘The Child of the Dawn,’ One Novelette ‘The Uttermost Farthing’ and Eight Short Stories of the Strange and Unusual

Home » Fiction » Supernatural and Horror Fiction » Male Authors » The Collected Supernatural and Weird Fiction of A. C. Benson: One Novel ‘The Child of the Dawn,’ One Novelette ‘The Uttermost Farthing’ and Eight Short Stories of the Strange and Unusual 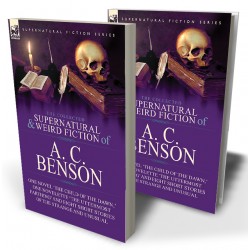 Tales of ghosts and horrors from a renowned literary academic

Arthur Christopher Benson was born in 1862 one of six children fathered by Edward White Benson, an Archbishop of Canterbury. A. C. Benson (as he is usually known) was an academic who became master of Magdalene College, Cambridge and is today possibly best remembered for writing the stirring lyrics to the British patriotic song ‘Land of Hope and Glory’ which is part of Elgar’s ‘Pomp and Circumstance March No 1’. Most of the Benson family were talented, but three brothers, Arthur Christopher, Edward Frederic (E. F.) and Robert Hugh (R. H.) became especially notable in the world of supernatural fiction. There can be little doubt that the literary laurels go to E. F. Benson whose output of supernatural fiction was particularly prolific, although he is also remembered as the writer of many other works including the humorous ‘Mapp and Lucia’ stories of English middle class ‘one-upmanship’. Nevertheless, the fiction of the weird and ghostly penned by the other Benson brothers will appeal to all aficionados of the golden age of the genre. Many of the stories written by A. C. Benson are moral allegories, although ‘Basil Netherby’ has been judged to be of the highest standard among horror stories despite its comparative obscurity. In the past the supernatural stories of A. C. and R. H. Benson have possibly been neglected, underrated or selectively combined to form single volumes, but Leonaur now offers collections of stories by each author separately as they undoubtedly merit.