Home » Fiction » Supernatural and Horror Fiction » Male Authors » The Collected Supernatural and Weird Fiction of Grant Allen: Volume 1—One Novel ‘Kalee’s Shrine’, and Nine Short Stories of the Strange and Unusual Including ‘Our Scientific Observations on a Ghost’, ‘Pallinghurst Barrow’ and others 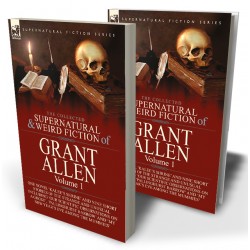