The Collected Supernatural and Weird Fiction of James Platt: Six Short Stories of the Strange and Unusual Including ‘The Evil Eye’ and ‘The Witch’s Sabbath’ 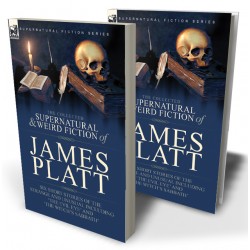 The complete supernatural fiction of a Victorian scholar

The second half of the nineteenth century was a golden age for supernatural fiction and such is the proliferation of ghost stories written in that period that it seems as if everyone who could write tried their hand at the genre. Among academics, the master of the literary ghost story. M. R. James is a notable example as are his friend E. G. Swain and several others. James Platt (1861-1910) was a scholar of British history specialising in the Anglo-Saxon period and was also a contributor to the original Oxford English Dictionary. Platt penned just one small collection of ghostly stories which was published in 1894. Despite his slender output his tales of the otherworldly are still held in high regard among critics and aficionados of supernatural fiction.

The stories in this collection, originally published as, 'Tales of the Supernatural' are 'The Seven Sigils', 'The Hand of Glory', 'The Rabbi Lion', 'The Evil Eye', 'The Witches' Sabbath' and 'The Devil's Debt'.

His rags were torn from his back. A hundred blades were thrust into his flesh. Those that had taken his part pulled him one way, the more law-abiding citizens pulled him another. His head swam, he lost his footing, he fell, and was trampled alike by friend and foe, in the pitched battle that was fought over his body. He lost consciousness, and knew no more.
When he recovered his painful identity, it was some time before he could remember what had passed. He was sick, as he fancied, from the rollings of the galley, and sore from the laying-on of the taskmaster’s whip. It was the possession of a certain ball, which he still clutched in his palm, which, after he had stared at it for a while, led him back to truth. When, by degrees, he had recovered his memory, he tried to make out of what substance it was formed, but without arriving at any conclusion, he carefully stowed it away.
He was most puzzled by the fact that he was in a room. It was dark, so that a considerable time must have elapsed. He rose, and felt all round the walls. There was no doubt about it. Presently he came upon the door. He tried it. It opened. He was evidently not a prisoner. He stepped into a passage, and up to another door. This one was locked, but the key was in it. He turned it, and opening the door disclosed the square. The mystery was now solved. He was in the precincts of the tavern. He had been saved, perhaps from death, by his good friend, the inn-keeper.
The night was magnificently clear. A single star hung low in the ear of the moon. He looked all around the deserted place that during his swoon must have been the scene of butcherly justice. The remnants of the stakes were evidence that the decrees of the law had really been executed. A few fragments of charred bone were now all that remained of the girl he had loved, he seemed to scent the odour of burnt flesh in the air. Suddenly, he became aware that he was not alone in his contemplation of this field of blood. Some man was ferreting about the bases of the stakes, and sifting the human dust that paved the square. It needed no second look to tell the galley-slave who this was, so much keener than love is hate. It was the man—or more than man—of whom Marquard had conferred with the inn-keeper. It was the Hungarian—Teremtette—the Evil Eye.
For what then was he a-search among this life that had ceased to live? Marquard thought that he could answer this question. The ball of so much mystery had been given to him by the witch, as a charm that would protect from this very man. The association of the Hungarian with her made it probable that he was acquainted with her possession of it, and with its powers. Such being the case, it was a property that he must itch to lay his fingers upon. Perhaps he had even attempted, and failed, to obtain it from her while she was alive. At any rate it was this, presumably, which he was agog for on the scene of her death. As a charm it would be unconsumable by fire, and had Marquard not been before him the Hungarian might have attained his end. The one weak point in the theory was that it supposed the wizard ignorant of Marquard’s return.
Yet this was not impossible, since surely even wizards have their limitations. Having decided upon this explanation of his rival’s presence, Marquard burned to confront him face to face. He strode boldly out of his protecting doorway. The Hungarian heard his step, looked up, and sprang to his feet. The galley-slave noted with a thrill that one of his eyes was closed. It was the Evil Eye against which he was soon to test his powers of endurance. For the wizard had evidently recognised him at once. His whole face was writhen with diabolical glee. Slowly he raised the lid that covered the Evil Eye. There was a gush of blinding light from under that veil. The square was lit up as by noonday sun. The ray struck remorselessly upon the sailor. He stood erect unshaken.
Astonishment was legible upon the magician’s features at this evident failure of his trusted weapon. He raised the lid to its fullest extent, and put all he was worth into the uncanny stare. But the sailor stood erect, unscathed. The charm was doing the work which its donor had foreseen, and doing that work right well. The galley-slave registered a vow never to part with it. Suddenly the magician dropped his eyelid, and the market-place once more was dark. He had apparently arrived at some decision, for now—for the first time—he spoke.
“Antlers of Belial! Do I see before me my old friend Marquard?”
“Your enemy to the hilts you see.”
“You must pardon my defective sight which obliged me to call in the aid of science before I recognised you. Who would have thought of seeing you here? But now I know you I shall not readily part with you. You shall sleep under no other roof than mine this night of your home-coming.”