The Collected Supernatural and Weird Fiction of H. H. Munro (Saki): Thirty-Four Short Stories of the Strange and Unusual Including ‘Laura’, ‘The Open Window’, ‘The Wolves of Cerogratz’, ‘The Blind Spot’ and ‘The Lumber Room’

Home » Fiction » Supernatural and Horror Fiction » Male Authors » The Collected Supernatural and Weird Fiction of H. H. Munro (Saki): Thirty-Four Short Stories of the Strange and Unusual Including ‘Laura’, ‘The Open Window’, ‘The Wolves of Cerogratz’, ‘The Blind Spot’ and ‘The Lumber Room’ 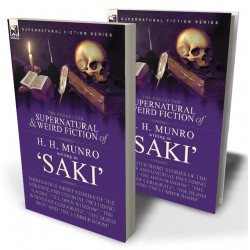 A renowned short story writer of the Edwardian era

Hector Hugh Munro was a British author and playwright who wrote under the pseudonym ‘Saki’ (a name which references the cup-bearer in the ‘Rubaiyat of Omar Khayyam’). He belongs to that rare group of writers, which includes Kipling, O. Henry and others, recognised as ‘masters of the short story’. His tales, which focus on the Edwardian culture and society of his times, are notable for their wit, mischievousness and satirical content. There existed many magazines eager to publish ghost and weird stories, for which the reading public had an insatiable appetite, and Saki was one of many writers who found success in them. Some of the stories collected here are now regarded as classics of the genre, among them is ‘Srendi Vashtar’, which has been adapted for opera, film, radio and television. Although officially too old at 43, Munro enlisted to fight in the First World War as an infantryman. He was killed at the Battle of Ancre in 1916. He has no known grave.

In this comprehensive collection of Saki tales, readers will discover ‘ Tobermory’, ‘The Open Window’, ‘The She-Wolf’, ‘The Image of a Lost Soul’, ‘The Interlopers’.’ The Lumber-Room’ and many more.

Sylvia was religious in an honest, vaguely devotional kind of way, and did not like to hear her beliefs spoken of as mere aftergrowths, but it was at least something new and hopeful to hear Dead Mortimer speak with such energy and conviction on any subject.
“You don’t really believe in Pan?” she asked incredulously.
“I’ve been a fool in most things,” said Mortimer quietly, “but I’m not such a fool as not to believe in Pan when I’m down here. And if you’re wise you won’t disbelieve in him too boastfully while you’re in his country.”
It was not till a week later, when Sylvia had exhausted the attractions of the woodland walks round Yessney, that she ventured on a tour of inspection of the farm buildings. A farmyard suggested in her mind a scene of cheerful bustle, with churns and flails and smiling dairymaids, and teams of horses drinking knee-deep in duck-crowded ponds. As she wandered among the gaunt grey buildings of Yessney manor farm her first impression was one of crushing stillness and desolation, as though she had happened on some lone deserted homestead long given over to owls and cobwebs; then came a sense of furtive watchful hostility, the same shadow of unseen things that seemed to lurk in the wooded combes and coppices.
From behind heavy doors and shuttered windows came the restless stamp of hoof or rasp of chain halter, and at times a muffled bellow from some stalled beast. From a distant corner a shaggy dog watched her with intent unfriendly eyes; as she drew near it slipped quietly into its kennel, and slipped out again as noiselessly when she had passed by. A few hens, questing for food under a rick, stole away under a gate at her approach. Sylvia felt that if she had come across any human beings in this wilderness of barn and byre, they would have fled wraith-like from her gaze. At last, turning a corner quickly, she came upon a living thing that did not fly from her. Astretch in a pool of mud was an enormous sow, gigantic beyond the town-woman’s wildest computation of swine-flesh, and speedily alert to resent and if necessary, repel the unwonted intrusion.
It was Sylvia’s turn to make an unobtrusive retreat. As she threaded her way past rickyards and cowsheds and long blank walls, she started suddenly at a strange sound—the echo of a boy’s laughter, golden and equivocal. Jan, the only boy employed on the farm, a tow-headed, wizen-faced yokel, was visibly at work on a potato clearing half-way up the nearest hillside, and Mortimer, when questioned, knew of no other probable or possible begetter of the hidden mockery that had ambushed Sylvia’s retreat. The memory of that untraceable echo was added to her other impressions of a furtive sinister “something” that hung around Yessney.
Of Mortimer she saw very little; farm and woods and trout-streams seemed to swallow him up from dawn till dusk. Once, following the direction she had seen him take in the morning, she came to an open space in a nut copse, further shut in by huge yew trees, in the centre of which stood a stone pedestal surmounted by a small bronze figure of a youthful Pan. It was a beautiful piece of workmanship, but her attention was chiefly held by the fact that a newly cut bunch of grapes had been placed as an offering at its feet. Grapes were none too plentiful at the manor house, and Sylvia snatched the bunch angrily from the pedestal.