The Collected Supernatural and Weird Fiction of Barry Pain—Volume 2: Seventeen Short Stories & One Novel of the Strange and Unusual 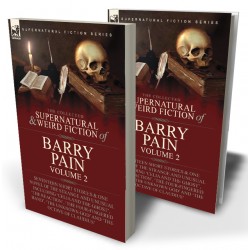 In this, the second volume of Pain’s strange fiction readers will discover ‘Mala’, ‘Miracles’, ‘The Unseen Power’, ‘The Undying Thing’ and many others.
Leonaur editions are newly typeset and are not facsimiles; each title is available in softcover and hardback with dustjacket.

“I saw it tonight.” Brackley spoke like a man suppressing some strong excitement. “It was just as you got up from the card-table after losing on your fours. I was on the point of urging you and the other two men to go on playing. I saw the hand distinctly. It seemed to be floating in the air about a couple of yards away from me. It was a small white hand, like a lady’s hand, cut short off at the wrist. For a second it moved slowly towards me, and then vanished. Nothing would have induced me to go playing poker tonight.”
“You are—excuse me for mentioning it—not in the least degree under the influence of drink. Further, you are by habit an almost absurdly temperate man. I mention these things because they have to be taken into consideration. They show that you were not at any rate the victim of a common and disreputable form of illusion. But what service has the hand done you? We play a regular point at the club. We are not the excited gamblers of fiction. We don’t increase the points, and we never play after one in the morning. At the moment when the hand appeared to you, how much had you won?”
“Twenty-five pounds—an exceptionally large amount.”
“Very well. You’re a careful player. You play best when your luck’s worst. We stopped play at half-past eleven. If we had gone on playing till one, and your luck had been of the worst possible description all the time, we will say that you might have lost that twenty-five and twenty-five more. To me it is inconceivable, but with the worst luck and the worst play it is perhaps possible. Now then, do you mean to tell me that the loss of twenty-five pounds is a matter of such importance to a man with your income as to require a supernatural intervention to prevent you from losing it?”
“Of course, it isn’t.”
“Well, then, the four-fingered hand has not accomplished its mission. It has not saved you from anything. It might even have been inconvenient. If you had been playing with strangers and winning, and they had wished to go on playing, you could hardly have refused. Of course, it did not matter with us—we play with you constantly, and can have our revenge at any time. The four-fingered hand is proved in this instance to have been useless and inept. Therefore, I am inclined to believe that the appearances when it really did some good were coincidences.
“Doubtless your grandfather and father and yourself have seen the hand, but surely that may be due to some slight hereditary defect in the seeing apparatus, which, under certain conditions, say, of the light and of your own health creates the illusion. The four-fingered hand is natural and not supernatural, subjective and not objective.”
“It sounds plausible,” remarked Brackley. He got up, crossed the room, and began to open the card-table. “Practical tests are always the most satisfactory, and we can soon have a practical test.” As he put the candles on the table, he started a little and nearly dropped one of them. He laughed drily. “I saw the four-fingered hand again just then,” he said. “But no matter—come—let us play.”
“Oh, the two game isn’t funny enough.”
“Then I’ll fetch up Blake from downstairs; you know him. He never goes to bed, and he plays the game.”
Blake, who was a youngish man, had chambers downstairs. Brackley easily persuaded him to join the party. It was decided that they should play for exactly an hour. It was a poor game; the cards ran low, and there was very little betting. At the end of the hour Brackley had lost a sovereign, and Yarrow had lost five pounds.
“I don’t like to get up a winner, like this,” said Blake. “Let’s go on.”
But Yarrow was not to be persuaded. He said that he was going off to bed. No allusion to the four-fingered hand was made in speaking in the presence of Blake, but Yarrow’s smile of conscious superiority had its meaning for Brackley. It meant that Yarrow had overthrown a superstition, and was consequently pleased with himself. After a few minutes’ chat Yarrow and Blake said goodnight to Brackley, and went downstairs together.
Just as they reached the ground-floor they heard, from far up the staircase, a short cry, followed a moment afterwards by the sound of a heavy fall.
“What’s that?” Blake exclaimed.
“I’m just going to see,” said Yarrow, quietly. “It seemed to me to come from Brackley’s rooms. Let’s go up again.”
They hurried up the staircase and knocked at Brackley’s door. There was no answer. The whole place was absolutely silent. The door was ajar; Yarrow pushed it open, and the two men went in.
The candles on the card-table were still burning. At some distance from them, in a dark corner of the room, lay Brackley, face downwards, with one arm folded under him and the other stretched wide.
Blake stood in the doorway. Yarrow went quickly over to Brackley, and turned the body partially over.
“What is it?” asked Blake, excitedly. “Is the man ill? Has he fainted?”
“Run downstairs,” said Yarrow, curtly. “Rouse the porter and get a doctor at once.”
The moment Blake had gone. Yarrow took a candle from the card-table, and by the light of it examined once more the body of the dead man. On the throat there was the imprint of a hand—a right hand with the second finger missing. The marks, which were crimson at first, grew gradually fainter.