The Collected Shorter Supernatural & Weird Fiction of Algernon Blackwood: Volume 1—Thirteen Short Stories and Four Novelettes of the Strange and Unusual Including ‘A Mysterious House’, ‘The Wood of the Dead’ & ‘The Dance of Death'

Home » Fiction » Supernatural and Horror Fiction » Male Authors » The Collected Shorter Supernatural & Weird Fiction of Algernon Blackwood: Volume 1—Thirteen Short Stories and Four Novelettes of the Strange and Unusual Including ‘A Mysterious House’, ‘The Wood of the Dead’ & ‘The Dance of Death' 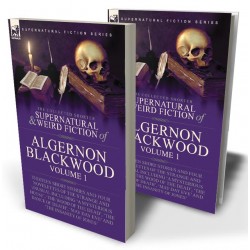 Algernon Henry Blackwood was one of the most prolific authors of supernatural and horror fiction in the history of the genre. In fact, his output was so great and rapidly produced that it is possible his entire cannon remains unknown. Born in Shooter’s Hill (which now part of south-east London) in 1869, his father was a civil servant and his mother was the widow of the 6th Duke of Manchester. As an adventurous young Englishman, Blackwood travelled to Canada and the USA where he worked at a number of jobs including as a journalist for the New York Times. At the turn of the 20th century Blackwood returned to Britain and embarked upon his career as a writer of supernatural and horror stories. His output was astonishing, resulting in at least ten collections of short stories together with 14 novels and plays. He regularly broadcast his work on radio and later on television. His two best known stories are probably, ‘The Willows’ and ‘The Wendigo’. Blackwood died from a stroke in 1951. The Leonaur collection of Blackwood’s strange fiction seeks to gather together the majority of his known shorter supernatural fiction into a comprehensive set.

In volume one the reader will discover four novelettes and thirteen short stories including,’ A Haunted Island’, ‘An Empty House’, ‘The Woman’s Ghost Story’ and others.

In the corner of the room on my right stood the woman. Her face was hid by a mass of tumbling hair, that made me think of living grasses on a field in June. Thus, her head was partially turned from me, and the moonlight, catching her outline, just revealed it against the wall like an impressionist picture. Strange hidden memories stirred in the depths of me, and for a moment I felt that I knew all about her. I stared about me quickly, nervously, trying to take in everything at once. Then the purring sound grew much louder and closer, and I forgot my notion that this woman was no stranger to me and that I knew her as well as I knew myself. That purring thing was in the room close beside me. Between us two, indeed, it was, for I now saw that her arm nearest to me was raised, and that she was pointing to the wall in front of us.
Following the direction of her hand, I saw that the wall was transparent, and that I could see through a portion of it into a small square space beyond, as though I was looking through gauze instead of bricks. This small inner space was lighted, and on stooping down I saw that it was a sort of cupboard or cell-like cage let into the wall. The thing that purred was there in the centre of it.
I looked closer. It was a being, apparently a human being, crouched down in its narrow cage, feeding. I saw the body stooping over a quantity of coarse-looking, piled-up substance that was evidently food. It was like a man huddled up. There it squatted, happy and contented, with the minimum of air, light, and space, dully satisfied with its prisoned cage behind the bars, utterly unconscious of the vast world about it, grunting with pleasure, purring like a great cat, scornfully ignorant of what might lie beyond. The cell, moreover, I saw was a perfect masterpiece of mechanical contrivance and inventive ingenuity—the very last word in comfort, safety and scientific skill. I was in the act of trying to fit in my memory some of the details of its construction and arrangement, when I made a chance noise, and at once became too agitated to note carefully what I saw. For at the noise the creature turned, and I saw that it was a human being—a man.
I was aware of a face close against my own as it pressed forward, but a face with embryonic features impossible to describe and utterly loathsome, with eyes, ears, nose and skin, only just sufficiently alive and developed to transfer the minimum of gross sensation to the brain. The mouth, however, was large and thick-lipped, and the jaws were still moving in the act of slow mastication.
I shrank back, shuddering with mingled pity and disgust, and at the same moment the woman beside me called me softly by my own name. She had moved forward a little so that she stood quite close to me, full in the thin stream of moonlight that fell across the floor, and I was conscious of a swift transition from hell to heaven as my gaze passed from that embryonic visage to a countenance so refined, so majestic, so divinely sensitive in its strength, that it was like turning from the face of a devil to look upon the features of a goddess.
At the same instant I was aware that both beings—the creature and the woman—were moving rapidly toward me.