The Collected Supernatural and Weird Fiction of Mrs Oliphant: Volume 3 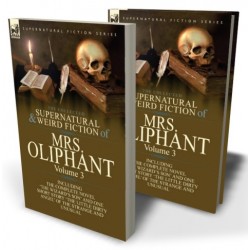 Scottish author, Margaret Oliphant belonged to a well known and highly regarded group of female fiction writers of the Victorian period. Their individual talents are undeniable, but their career paths often followed a remarkably similar pattern. Most were writers of both novels and short stories, all were prolific and able to turn their pens successfully to a variety subjects and themes. Many of them wrote regularly for the periodicals of the day, and Mrs. Oliphant (her usual nom-de-plume) frequently wrote for ‘Blackwood’s Magazine’ and specialised in the creation of tales of domestic realism, historical fiction and the genre for which she is most remembered today, ghost stories. That harshest of literary critics—and one of the finest exponents of the craft of supernatural fiction—M. R. James thought highly of Margaret Oliphant’s work in the genre, drawing particular attention in his writings on the subject to her long ghost story ‘The Beleaguered City,’ which is included in this comprehensive three volume edition of Mrs. Oliphant’s well crafted and chilling tales of the uncanny.
In volume three readers will find the long and haunting complete novel ‘The Wizard’s Son’ and the short story ‘The Little Dirty Angel’.
Leonaur editions are newly typeset and are not facsimiles; each title is available in softcover and hardback with dustjacket.

Walter’s nerves and imagination sprang up into full play again, and got command of his reason.
By moments it seemed to him that he caught a glimpse still of an outline in the chair, of eyes looking at him, of the smile and the voice which expressed so full a knowledge of all his own past history and everything that was in him. This consciousness gave to his eyes the same scared yet searching look which he had seen in those of Symington, took his breath from him, made his head whirl, and his heart fail. Symington waiting behind his chair, but eagerly on the watch for any sign, saw that his young lord was ghastly pale, and perceived the half stealthy look which he cast around him, and especially the entire failure of his appetite. This is a thing which no Scotch domestic can bear.
“You are no eating, my lord,” he said in a tone of gentle reproach, as he withdrew the plate with the untasted trout. (“That many a poor gentleman would have been glad of!” he said to himself.)
“No, I am not particularly hungry,” Walter said, with a pretence at carelessness.
“I can recommend the bird,” said Symington, “if it’s no just a cheeper, for the season is advanced, it’s been young and strong on the wing; and good game is rich, fortifying both to the body and spirit. Those that have delicate stomachs, it is just salvation to them—and for those that are, as ye may say, in the condition of invalids in the mind—”
Symington had entirely recovered from his own nervousness. He moved about the room with a free step, and felt himself fully restored to the position of counsellor and adviser, with so much additional freedom as his young master was less in a position to restrain him, and permitted him to speak almost without interruption. Indeed Walter as he ineffectually tried to eat was half insensible to the monologue going on over his head.
“Ye must not neglect the body,” Symington said, “especially in a place like this where even the maist reasonable man may be whiles put to it to keep his right senses. If ye’ll observe, my lord, them that see what ye may call visions are mostly half starvit creatures, fasting or ill-nourished. Superstition, in my opinion, has a great deal to do with want of meat. But your lordship is paying no attention. Just two three mouthfuls, my lord! just as a duty to yourself and all your friends, and to please a faithful auld servant,” Symington said, with more and more insinuating tones. There was something almost pathetic in the insistence with which he pressed “a breast of pairtridge that would tempt a saint” upon his young master.
The humour of it struck Walter dully through the confusion of his senses. It was all like a dream to him made up of the laughable and the miserable; until Symington at last consented to see that his importunities were unavailing, and after a tedious interval of clearing away, took himself and all his paraphernalia out of the room, and left Walter alone. It seemed to Lord Erradeen that he had not been alone for a long time, nor had any leisure in which to collect his faculties; and for the first few minutes after the door had closed upon his too officious servant a sense of relief was in his mind. He drew a long breath of ease and consolation, and throwing himself back in his chair gave himself up to momentary peace.
But this mood did not last long. He had not been alone five minutes before there sprang up within him something which could be called nothing less than a personal struggle with—he could not tell what. There is a quickening of excitement in a mental encounter, in the course of a momentous discussion, which almost reaches the height of that passion which is roused by bodily conflict, when the subject is important enough, or the antagonists in deadly earnest. But to describe how this is intensified when the discussion takes place not between two, but in the spiritual consciousness of one, is almost too much for words to accomplish. Lord Erradeen in the complete solitude of this room, closed and curtained and shut out from all access of the world, suddenly felt himself in the height of such a controversy. He saw no one, nor did it occur to him again to look for anyone.
There was no need. Had his former visitor appeared, as before, seated opposite to him in the chair which stood so suggestively between the fire and the table, his pulses would have calmed, and his mind become composed at once. But there was nobody to address him in human speech, to oppose to him the changes of a human countenance. The question was discussed within himself with such rapidity of argument and reply, such clash of intellectual weapons, as never occurs to the external hearing. There passed thus under review the entire history of the struggle which had been going on from the time of Lord Erradeen’s first arrival at the home of his race. It ran after this fashion, though with the quickness of thought far swifter than words.
Books from this set
You may also like