The Unseen Hand: Supernatural and Weird Fiction by Unknown Authors 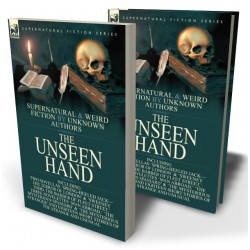 An unusual collection of supernatural fiction by unknown authors

As every aficionado of ghostly and mysterious fiction knows the thrill of the tale is not to found in what the reader knows and is told but rather that which hidden, suggested or unknown. So it is perhaps fitting that this collection of supernatural tales by authors unknown has been gathered together as a unique Leonaur edition. It is strange indeed that many of these writers have conceived excellent characters and scenarios and yet have not declared their authorship! What makes this mystery even more compelling is that among these titles are those that have become famous and even iconic including ‘the demon barber’, Sweeney Todd and the elusive ‘Terror of London’, Spring-heeled Jack! Gathered here are twenty-three short stories, novellas and novelettes, crafted by unknown and unseen hands, to make us shiver by a warm fire on a cold night! Included in are, ‘In the Fog,’ ‘The Banshee,’ ‘The Weird Violin,’ ‘The Dead Bride,’ ‘The Murder Hole,’ ‘The Mysterious Stranger’ and many more gripping and chilling tales to enjoy.
Leonaur editions are newly typeset and are not facsimiles; each title is available in softcover and hardback with dustjacket.