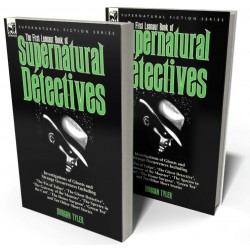 Solving the mysteries of the world of the unknown

Every genre of fiction has its aficionados and this has guaranteed that the enthusiasm for detective stories and tales of the ghostly and horrific has endured for decades. In the interests of appealing to as wide a readership as possible it was inevitable that many writers would produce hybrid tales which combine the essential elements of the ‘whodunnit?’ and the ‘what is it?’. So the ‘supernatural detective’ came into being. While literary hybrids are not always successful, this particular combination works, and tales of ghost sleuths have proliferated and have gathered their own devoted readers. Leonaur is compiling many of the best of these stories into a multi-volume anthology series featuring tales of memorable investigators who seek to discover exactly what did go bump in the night. This first volume contains sixteen short stories, by some of the best loved authors from the ‘golden age’ of supernatural fiction, to delight those who enjoy their mystery tinged with the uncanny. Here are yarns to intrigue the mind and chill the blood by Mark Lemon, Gordon McCreagh, Enoch F. Gerrish, Richard Marsh, Mrs. Riddell, Thomas Nelson Page and many others.

The spirit presented a very strange appearance. He himself was not luminous, except some tongues of fire that seemed to proceed from the tips of his fingers, but was completely surrounded by a thin gauze of light, so to speak, through which his outlines were visible. His head was bare, and his white hair fell in huge masses around his stern, saturnine face. As he moved on the floor, I distinctly heard a strange crackling sound, such as one hears when a substance has been overcharged with electricity. But the circumstance that seemed to me most incomprehensible connected with the apparition, was that Mr. Van Koeren held in both hands a curiously-painted flower-pot, out of which sprang a number of the most beautiful tulips in full blossom. He seemed very uneasy and agitated, and moved about the room as if in pain, frequently bending over the pot of tulips as if to inhale their odour, then holding it out to me, seemingly in the hope of attracting my attention to it.
I was, I confess, very much puzzled. I knew that Mr. Van Koeren had in his lifetime devoted much of his leisure to the cultivation of flowers, importing from Holland the most expensive and rarest bulbs; but how this innocent fancy could trouble him after death, I could not imagine. I felt assured, however, that some important reason lay at the bottom of this spectral eccentricity, and determined to fathom it if I could.
“What brings you here?” I asked audibly; directing mentally, however, at the same time, the question to the spirit with all the power of my will. He did not seem to hear me, but still kept moving uneasily about, with the crackling noise I mentioned, and holding the pot of tulips toward me.
“It is evident,” I said to myself, “that I am not sufficiently en rapport with this spirit in order for him to make himself understood by speech. He has, therefore, recourse to symbols. The pot of tulips is a symbol. But of what?”
While reflecting on these things, I continued to gaze upon the spirit. While observing him attentively, he approached my bedside by a rapid movement, and laid one hand on my arm. The touch was icy cold, and pained me at the moment. Next morning my arm was swollen, and marked with a round blue spot. Then passing to my bedroom-door, the spirit opened it noisily and went out, shutting it behind him. Catching for a moment at the idea that I was the dupe of a trick, I jumped out of bed and ran to the door. It was locked, with the key on the inside, and a brass safety-bolt, which lay above the lock, shot safely home. All was as I had left it on going to bed. Yet I declare most solemnly, that as the ghost made his exit, I not alone saw the door open, but I saw the corridor outside, and distinctly observed a large picture of William of Orange that hung just opposite to my room.
This to me was the most curious portion of the phenomena I had witnessed. Either the door had been opened by the ghost, and the resistance of physical obstacles overcome in some amazing manner—because in this case the bolts must have been replaced when the ghost was outside the door—or he must have had a sufficient magnetic rapport with my mind to impress upon it the belief that the door was opened, and also to conjure up in my brain the vision of the corridor and the picture, features that I would have seen if the door had been opened by any ordinary physical agency.
The next morning at breakfast I suppose my manner must have betrayed me, for Jasper said to me, after staring at me for some time,
“Why, Harry Escott, what’s the matter with you? You look as if you had seen a ghost!”
“So I have, Jasper.”
Jasper, of course, burst into a loud fit of laughter, and said he’d shave my head and give me a shower-bath.
“Well, you may laugh,” I answered; “but you shall see it tonight, Jasper.”
He became serious in a moment—I suppose there was something earnest in my manner that convinced him that my words were not idle—and asked me to explain. I described my interview as accurately as I could.
“How did you know that it was old Van Koeren?” he asked.
“Because I have seen his picture a hundred times with Alice,” I answered, “and this apparition was as like it as it was possible for a ghost to be like a miniature.”
Books from this set
You may also like