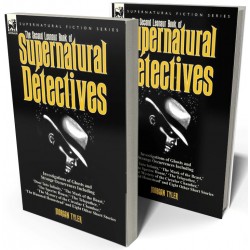 Investigations to explain the unexplainable

This second helping of tales from the casebooks of fictional sleuths of the supernatural continues in the same chilling and engrossing style as the First Leonaur Book of Supernatural Detectives with a generous collection of stories penned by masters—and mistresses—of the craft of writing spooky detective stories. This volume contains fourteen investigations in which dauntless detectives of the bizarre face all kinds of hazards in order to unravel the causes of strange and unearthly occurrences. Included here are ‘The Door Into Infinity’ by Edmond Hamilton, ‘The Spectre House’ by Gelett Burgess, ‘The Telepather’ by Henry A. Hering, ‘The Haunted Homestead’ by Henry Herbert and other enjoyable yarns to thrill and terrify readers! An essential anthology series for all aficionados of the genre.