The Collected Supernatural and Weird Fiction of Violet Hunt: Volume 1—One Novella ‘Love’s Last Leave’, and Seven Short Stories of the Strange and Unusual Including ‘The Night of No Weather’, ‘The Coach’ and ‘The Blue Bonnet’

Home » Fiction » Supernatural and Horror Fiction » Leonaur Originals » The Collected Supernatural and Weird Fiction of Violet Hunt: Volume 1—One Novella ‘Love’s Last Leave’, and Seven Short Stories of the Strange and Unusual Including ‘The Night of No Weather’, ‘The Coach’ and ‘The Blue Bonnet’ 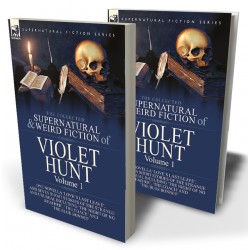 This first volume contains the novella ‘Love’s Last Leave’, and seven short stories including ‘The Night of No Weather’, ‘The Coach’ and ‘The Blue Bonnet’ .

“Spoke last at seven o’clock last night, Miss, I said. Died sometime in the night, or, may be, directly after he did speak. At least, part of him may have died, as ignorant people seem to think. He was hardly breathing at a little before eight, but the last spark may have held on longer.”
“I suppose you know, Nurse, that he dined with me last night, at a quarter-past eight,” said the girl stonily, looking away from the nurse’s apathetic face, which changed at once, sympathetically;—
“Miss, you’re upset! You took it so calm at first. Have some brandy. You have had a shock. One understands—”
“He dined with me,” Alice repeated obstinately.
The nurse stared at her, and shrugged her shoulders. Poor girl! She was evidently one of the outwardly quiet ones, who smother the symptoms of disturbance, only to feel the shock more keenly. People take these things in such a variety of ways. The idea of the dinner party had got fixed in her mind by the shock; she was unable now to let go the idea of Everard’s keeping his engagement with her. She had received the telegram all right, of course, there could be no doubt of it, and some domestic reason had prevented her from responding to the summons. Or, possibly, that same backwardness and want of interest which had affected the smooth course of the engagement had been at work. She hadn’t cared for him much, though she had been persuaded into giving her word. . . .
In an even tone, calculated to restore the shattered nerves of the shaken girl, the nurse remarked—
“Mr. Jenkyns’ sister-in-law, the one that lives in France, will be here presently, to see about the funeral arrangements. He wanted you to have all his old china and books, Miss, he used to say so, and doubtless that will be done. . . .”
But Alice Damer had gone resolutely across to the bed from which the two, in the course of conversation, had unconsciously deviated.
She dexterously turned down the sheet, and stooping, performed the rite of love, the little act of devotion which she had refused him just before. What was she saying? Mrs. Clarkson observed closely what she considered one of the curiosities of mental stress.
“I kissed him last night, when he came to me. . . . So you see, whether I liked it or not, I did kiss a dead man! And it’s no use minding now, is it?”
She kissed him repeatedly, with a pale semblance of passion.
The nurse took her arm gently and led her away from the bed, and she submitted to be placed in a chair.
“Miss, now you’ve done that, you’ll feel better. I should go home if I were you. Take that hansom outside. It’s the one you came in, perhaps—and you haven’t paid him?”
Alice signified a negative to this, helplessly, but allowed the nurse to pin her veil on for her. It hid her tear-stained face a little. Then the good woman led her downstairs and out on to the pavement. Sure enough, there was a hansom waiting there, and the nurse hailed the driver.
Gruffly, he turned round, and stared at them.
“And I say,” he appeared to be remarking, “and I say, who’s going to pay me my fare?”
“Why, the lady will, of course. Get in, Miss, I’ll hold your dress away from the wheel.”
But the cabman was not satisfied, nor did he address himself to the task of resuming his drooping reins. He seemed to have had a shock too.
“No, I didn’t mean her. Who’s going to pay me three bob for last night and for waiting ’ere? . . .”