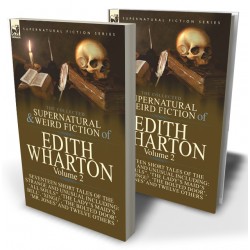 Stories in this volume include: ‘All Souls’’, ‘The Lady’s Maid’s Bell’, ‘Xingu’, ‘The Bolted Door’, ‘Mr. Jones’ and twelve others.

The room was pitch black, and at first I saw nothing; but gradually a vague glimmer at the foot of the bed turned into two eyes staring back at me. I couldn’t see the face attached to them—on account of the darkness, I imagined—but as I looked the eyes grew more and more distinct: they gave out a light of their own.
“The sensation of being thus gazed at was far from pleasant, and you might suppose that my first impulse would have been to jump out of bed and hurl myself on the invisible figure attached to the eyes. But it wasn’t—my impulse was simply to lie still ... I can’t say whether this was due to an immediate sense of the uncanny nature of the apparition—to the certainty that if I did jump out of bed I should hurl myself on nothing—or merely to the benumbing effect of the eyes themselves. They were the very worst eyes I’ve ever seen: a man’s eyes—but what a man! My first thought was that he must be frightfully old. The orbits were sunk, and the thick red-lined lids hung over the eyeballs like blinds of which the cords are broken. One lid drooped a little lower than the other, with the effect of a crooked leer; and between these pulpy folds of flesh, with their scant bristle of lashes, the eyes themselves, small glassy disks with an agate-like rim about the pupils, looked like sea-pebbles in the grip of a starfish.
“But the age of the eyes was not the most unpleasant thing about them. What turned me sick was their expression of vicious security. I don’t know how else to describe the fact that they seemed to belong to a man who had done a lot of harm in his life, but had always kept just inside the danger lines. They were not the eyes of a coward, but of someone much too clever to take risks; and my gorge rose at their look of base astuteness. Yet even that wasn’t the worst; for as we continued to scan each other I saw in them a tinge of faint derision, and felt myself to be its object.
“At that I was seized by an impulse of rage that jerked me out of bed and pitched me straight on the unseen figure at its foot. But of course there wasn’t any figure there, and my fists struck at emptiness. Ashamed and cold, I groped about for a match and lit the candles. The room looked just as usual—as I had known it would; and I crawled back to bed, and blew out the lights.
“As soon as the room was dark again the eyes reappeared; and I now applied myself to explaining them on scientific principles. At first I thought the illusion might have been caused by the glow of the last embers in the chimney; but the fire-place was on the other side of my bed, and so placed that the fire could not possibly be reflected in my toilet glass, which was the only mirror in the room. Then it occurred to me that I might have been tricked by the reflection of the embers in some polished bit of wood or metal; and though I couldn’t discover any object of the sort in my line of vision, I got up again, groped my way to the hearth, and covered what was left of the fire. But as soon as I was back in bed the eyes were back at its foot.
“They were an hallucination, then: that was plain. But the fact that they were not due to any external dupery didn’t make them a bit pleasanter to see. For if they were a projection of my inner consciousness, what the deuce was the matter with that organ? I had gone deeply enough into the mystery of morbid pathological states to picture the conditions under which an exploring mind might lay itself open to such a midnight admonition; but I couldn’t fit it to my present case. I had never felt more normal, mentally and physically; and the only unusual fact in my situation—that of having assured the happiness of an amiable girl—did not seem of a kind to summon unclean spirits about my pillow. But there were the eyes still looking at me. . . .
“I shut mine, and tried to evoke a vision of Alice Nowell’s. They were not remarkable eyes, but they were as wholesome as fresh water, and if she had had more imagination—or longer lashes—their expression might have been interesting. As it was, they did not prove very efficacious, and in a few moments I perceived that they had mysteriously changed into the eyes at the foot of the bed. It exasperated me more to feel these glaring at me through my shut lids than to see them, and I opened my eyes again and looked straight into their hateful stare. . . .
“And so it went on all night. I can’t tell you what that night was, nor how long it lasted. Have you ever lain in bed, hopelessly wide awake, and tried to keep your eyes shut, knowing that if you opened ’em you’d see something you dreaded and loathed? It sounds easy, but it’s devilish hard. Those eyes hung there and drew me. I had the vertige de l’abime, and their red lids were the edge of my abyss. . . . I had known nervous hours before: hours when I’d felt the wind of danger in my neck; but never this kind of strain. It wasn’t that the eyes were so awful; they hadn’t the majesty of the powers of darkness. But they had—how shall I say?—a physical effect that was the equivalent of a bad smell: their look left a smear like a snail’s. And I didn’t see what business they had with me, anyhow—and I stared and stared, trying to find out. . . .
Books from this set
You may also like