The Collected Supernatural and Weird Fiction of Grant Allen: Volume 2—Fourteen Short Stories of the Strange and Unusual Including ‘Wolverden Tower’, ‘The Jaws of Death’, ‘The Beckoning Hand’ and ‘Pausodyne: A Great Chemical Discovery’

Home » Fiction » Supernatural and Horror Fiction » Multi volume sets » The Collected Supernatural and Weird Fiction of Grant Allen: Volume 2—Fourteen Short Stories of the Strange and Unusual Including ‘Wolverden Tower’, ‘The Jaws of Death’, ‘The Beckoning Hand’ and ‘Pausodyne: A Great Chemical Discovery’ 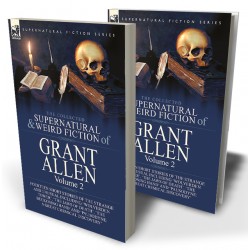 Volume two of the supernatural fiction of Grant Allen

Volume two contains fourteen short stories of the strange and unusual including ‘Wolverden Tower’, ‘The Jaws of Death’, ‘The Beckoning Hand’ and ‘Pausodyne: A Great Chemical Discovery’.

“Go,” I said, with a smile, turning my horse’s head up the right-hand path toward the Vaudoux temple. “I am not afraid. I will come back again to Maisonette tomorrow.”
I followed the path through a tortuous maze, beset with prickly cactus, agave, and fern-brake, till I came at last to a spur of the hill, where a white wooden building gleamed in front of me, in the full slanting rays of tropical sunset. A skull was fastened to the lintel of the door. I knew at once it was the Vaudoux temple.
I dismounted at once, and led my horse aside into the brake, though I tore his legs and my own as I went with the spines of the cactus plants; and tying him by the bridle to a mountain cabbage palm, in a spot where the thick underbrush completely hid us from view, I lay down and waited patiently for the shades of evening.
It was a moonless night, according to the Vaudoux fashion; and I knew from what I had already read in West Indian books that the orgies would not commence till midnight.
From time to time, I rubbed a fusee against my hand without lighting it, and by the faint glimmer of the phosphorus on my palm, I was able to read the figures of my watch dial without exciting the attention of the neighbouring Vaudoux worshippers.
Hour after hour went slowly by, and I crouched there still unseen among the agave thicket. At last, as the hands of the watch reached together the point of twelve, I heard a low but deep rumbling noise coming ominously from the Vaudoux temple. I recognized at once the familiar sound. It was the note of the bull-roarer, that mystic instrument of pointed wood, whirled by a string round the head of the hierophant, by whose aid savages in their secret rites summon to their shrines their gods and spirits. I had often made one myself for a toy when I was a boy in England.
I crept out through the tangled brake, and cautiously approached the back of the building. A sentinel was standing by the door in front, a powerful negro, armed with revolver and cutlass. I skulked round noiselessly to the rear, and lifting myself by my hands to the level of the one tiny window, I peered in through a slight scratch on the white paint, with which the glass was covered internally.
I only saw the sight within for a second. Then my brain reeled, and my fingers refused any longer to hold me. But in that second, I had read the whole terrible, incredible truth: I knew what sort of a woman she really was whom I had blindly taken as the wife of my bosom.
Before a rude stone altar covered with stuffed alligator skins, human bones, live snakes, and hideous sorts of African superstition, a tall and withered black woman stood erect, naked as she came from her mother’s womb, one skinny arm raised aloft, and the other holding below some dark object, that writhed and struggled awfully in her hand on the slab of the altar, even as she held it. I saw in a flash of the torches behind it was the black hag I had watched before at the Port-au-Prince cottage.
Beside her, whiter of skin, and faultless of figure, stood a younger woman, beautiful to behold, imperious and haughty still, like a Greek statue, unmoved before that surging horrid background of naked black and cringing savages. Her head was bent, and her hand pressed convulsively against the swollen veins in her throbbing brow; and I saw at once it was my own wife—a Vaudoux worshipper—Césarine Tristram.
In another flash, I knew the black woman had a sharp flint knife in her uplifted hand; and the dark object in the other hand I recognised with a thrill of unspeakable horror as a negro girl of four years old or thereabouts, gagged and bound, and lying on the altar.
Before I could see the sharp flint descend upon the naked breast of the writhing victim, my fingers in mercy refused to bear me, and I fell half fainting on the ground below, too shocked and unmanned even to crawl away at once out of reach of the awful unrealisable horror.
But by the sounds within, I knew they had completed their hideous sacrifice, and that they were smearing over Césarine—my own wife—the woman of my choice—with the warm blood of the human victim.
Sick and faint, I crept away slowly through the tangled underbrush, tearing my skin as I went with the piercing cactus spines; untied my horse from the spot where I had fastened him; and rode him down without drawing rein, cantering round sharp angles and down horrible ledges, till he stood at last, white with foam, by the grey dawn, in front of the little piazza at Maisonette.