The Collected Supernatural and Weird Fiction of Barry Pain—Volume 1: Seventeen Short Stories & Two Novels of the Strange and Unusual 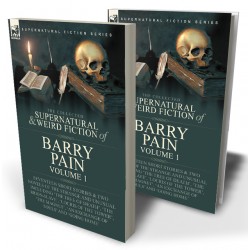 Volume one of Barry Pain’s tales of terror

Barry Eric Odell Pain was born in Cambridge, England in 1864. A graduate of Corpus Christi college, Cambridge, he joined the staff of the Daily Chronicle and Black and White periocals. He became a regular contributor to the literary magazine The Granta and to Cornhill Magazine, Punch and The Speaker. In keeping with many authors of his era, his literary output was prodigious. Credit for the recognition he eventually achieved is said to have come from endorsements by Robert Louis Stevenson who compared Pain’s writings to those of Guy de Maupassant. There is a dark side to some of Pain’s writing, although he has been more widely recognised as a parodist and writer of lightly humorous stories. This darker side of Pain’s work has resulted in a substantial legacy of supernatural, horror and weird fiction. This is possibly why his work, particularly the very well-known, ‘The Undying Thing’, was highly regarded by H.P. Lovecraft.

In the first volume of this comprehensive three volume Leonaur collection of Barry Pain’s fiction of the strange readers will discover ‘The Glass of Supreme Moments’, ‘The Missing Years’, ‘The Unfinished Game’, ‘This is All’ and many others.

His “Aphrodite” seemed to have a somewhat mocking expression. It was a little, technical thing, to be corrected easily. He set his palette and selected his brushes. An attempt to roll a cigarette revealed the fact that his pouch was empty. It still wanted a few minutes to nine. He would have time to go up to the tobacconist at the corner. In case Rose Rose arrived while he was away, he left the studio door open. The tobacconist was also a news-agent, and he bought a morning paper. Rose would probably be twenty minutes late at the least, and this would be something to occupy him.
But on his return, he found his model already stepping onto the throne.
“Good-morning, Miss Rose. You’re a lady of your word.” He hardly heeded the murmur which came to him as a reply. He threw his cigarette into the stove, picked up his palette, and got on excellently. The work was absorbing. For some time, he thought of nothing else. There was no relaxing on the part of the model—no sign of fatigue. He had been working for over an hour, when his conscience smote him. “We’ll have a rest now, Miss Rose,” he said cheerily. At the same moment he felt human fingers drawn lightly across the back of his neck, just above the collar. He turned round with a sudden start. There was nobody there. He turned back again to the throne. Rose Rose had vanished.
With the utmost care and deliberation, he put down his palette and brushes. He said in a loud voice, “Where are you, Miss Rose?” For a moment or two silence hung in the hot air of the studio. He repeated his question and got no answer. Then he stepped behind the screen, and suddenly the most terrible thing in his life happened to him. He knew that his model had never been there at all.
There was only one door out to the back street in which his studio was placed, and that door was now locked. He unlocked it, put on his hat, and went out. For a minute or two he paced the street, but he had got to go back to the studio.
He went back, sat down in the easy-chair, lit a cigarette, and tried for a plausible explanation. Undoubtedly, he had been working very hard lately. When he had come back from the tobacconist’s to the studio he had been in the state of expectant attention, and he was enough of a psychologist to know that in that state you are especially likely to see what you expect to see. He was not conscious of anything abnormal in himself. He did not feel ill, or even nervous. Nothing of the kind had ever happened to him before. The more he considered the matter, the more definite became his state. He was thoroughly frightened. With a great effort he pulled himself together and picked up the newspaper.
It was certain that he could do no more work for that day, anyhow. An ordinary, commonplace newspaper would restore him. Yes, that was it. He had been too much wrapped up in the picture. He had simply supposed the model to be there.
Books from this set
You may also like