The Collected Supernatural and Weird Fiction of Barry Pain—Volume 3: Eight Short Stories, Two Novellas & One Novel of the Strange and Unusual 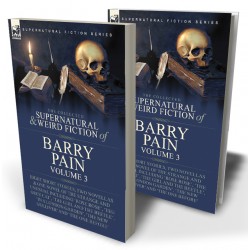 Volume three of Barry Pain’s fiction of the bizarre

In this, the third volume of Pain’s weird fiction readers will discover, ‘“Bill”’, ‘Smeath’, ‘The Widower’, ‘Zero’ and many others.

Sefton came back to his picture. In spite of Miss Rose’s vehement assurances, he felt by no means sure of her, but it was difficult for him to refuse any woman anything, and impossible for him to refuse to pay her what he really owed. He scrawled in charcoal some directions to the charwoman who would come in the morning. She was, from his point of view, a prize charwoman—one who could, and did, wash brushes properly, one who understood the stove, and would, when required, refrain from sweeping.
He picked up his hat and went out. He walked the short distance from his studio to his bachelor flat, looked over an evening paper as he drank his tea, and then changed his clothes and took a cab to the club for dinner. He played one game of billiards after dinner, and then went home. His picture was very much in his mind. He wanted to be up fairly early in the morning, and he went to bed early. He was at his studio by half-past eight. The stove was lighted, and he piled more coke on it.
His “Aphrodite” seemed to have a somewhat mocking expression. It was a little, technical thing, to be corrected easily. He set his palette and selected his brushes. An attempt to roll a cigarette revealed the fact that his pouch was empty. It still wanted a few minutes to nine. He would have time to go up to the tobacconist at the corner. In case Rose Rose arrived while he was away, he left the studio door open. The tobacconist was also a news-agent, and he bought a morning paper. Rose would probably be twenty minutes late at the least, and this would be something to occupy him.
But on his return, he found his model already stepping onto the throne.
“Good-morning, Miss Rose. You’re a lady of your word.” He hardly heeded the murmur which came to him as a reply. He threw his cigarette into the stove, picked up his palette, and got on excellently. The work was absorbing. For some time, he thought of nothing else. There was no relaxing on the part of the model—no sign of fatigue. He had been working for over an hour, when his conscience smote him. “We’ll have a rest now, Miss Rose,” he said cheerily. At the same moment he felt human fingers drawn lightly across the back of his neck, just above the collar. He turned round with a sudden start. There was nobody there. He turned back again to the throne. Rose Rose had vanished.
With the utmost care and deliberation, he put down his palette and brushes. He said in a loud voice, “Where are you, Miss Rose?” For a moment or two silence hung in the hot air of the studio. He repeated his question and got no answer. Then he stepped behind the screen, and suddenly the most terrible thing in his life happened to him. He knew that his model had never been there at all.
There was only one door out to the back street in which his studio was placed, and that door was now locked. He unlocked it, put on his hat, and went out. For a minute or two he paced the street, but he had got to go back to the studio.
He went back, sat down in the easy-chair, lit a cigarette, and tried for a plausible explanation. Undoubtedly, he had been working very hard lately. When he had come back from the tobacconist’s to the studio he had been in the state of expectant attention, and he was enough of a psychologist to know that in that state you are especially likely to see what you expect to see. He was not conscious of anything abnormal in himself. He did not feel ill, or even nervous. Nothing of the kind had ever happened to him before. The more he considered the matter, the more definite became his state. He was thoroughly frightened. With a great effort he pulled himself together and picked up the newspaper.
It was certain that he could do no more work for that day, anyhow. An ordinary, commonplace newspaper would restore him. Yes, that was it. He had been too much wrapped up in the picture. He had simply supposed the model to be there.
He was quite unconvinced, of course, and merely trying to convince himself. As an artist, he knew that for the last hour or more he had been getting the most delicate modelling right from the living form before him. But he did his best, and read the newspaper assiduously. He read of tariff, protection, and of a new music-hall star. Then his eye fell on a paragraph headed “Motor Fatalities.”
He read that Miss Rose, an artist’s model, had been knocked down by a car in the Fulham Road about seven o’clock on the previous evening; that the owner of the car had stopped and taken her to the hospital, and that she had expired within a few minutes of admission.
He rose from his place and opened a large pocketknife. There was a strong impulse upon him, and he felt it to be a mad impulse, to slash the canvas to rags. He stopped before the picture. The face smiled at him with a sweetness that was scarcely earthly.
He went back to his chair again. “I’m not used to this kind of thing,” he said aloud. A board creaked at the far end of the studio. He jumped up with a start of horror. A few minutes later he had left the studio, and locked the door behind him. His common-sense was still with him. He ought to go to a specialist. But the picture—
Books from this set
You may also like