The Collected Supernatural and Weird Fiction of May Sinclair: Eight Short Stories and Four Novellas of the Strange and Unusual Including ‘The Token’, ‘The Victim’, ‘The Mahatma’s Story’, ‘The Flaw in the Crystal’ and ‘The Intercessor’

Home » Fiction » Supernatural and Horror Fiction » Books containing two or more titles » The Collected Supernatural and Weird Fiction of May Sinclair: Eight Short Stories and Four Novellas of the Strange and Unusual Including ‘The Token’, ‘The Victim’, ‘The Mahatma’s Story’, ‘The Flaw in the Crystal’ and ‘The Intercessor’ 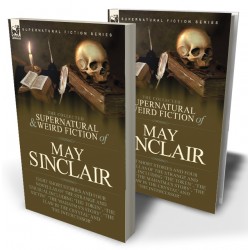 May Sinclair was the pseudonym used by the prolific, but underrated, British writer, Mary Amelia St. Clair. Active in the late 19th and early 20th centuries, Sinclair was typical among writers of her period in the significant volume and breadth of her literary output, which included novels, short stories and poetry. From 1896 Sinclair, motivated by the need to support herself and her mother, wrote professionally. Her 1913 novel, ‘The Combined Maze’, was highly praised by George Orwell, whilst Agatha Christie regarded it as, ‘one of the greatest English novels of its time’. Her work was also well received in the United States of America. She wrote two volumes of supernatural fiction, ‘Uncanny Stories’ and, ‘The Intercessor and Other Stories’ both of which are included in this Leonaur collection. Several authorities on the supernatural genre have praised the quality of Sinclair’s work, with regrets only about the modest number of such stories she wrote. Sinclair’s writing is considered to be be subtle, concise and modern despite her choice of traditional themes.

In this Leonaur edition readers will discover ‘The Intercessor’, ‘The Token’, ‘The Flaw in The Crystal’, ‘If the Dead Knew’ and others.

As she turned the corner of the wood, she was brought suddenly in sight of the valley. A hot wave swept over her brain, so strong that she staggered as it passed. It was followed by a strange sensation of physical sickness, that passed also. It was then as if what went through her had charged her nerves of sight to a pitch of insane and horrible sensibility. The green of the grass, and of the young corn, the very colour of life, was violent and frightful. Not only was it abominable in itself, it was a thing to be shuddered at, because of some still more abominable significance it had.
Agatha had known once, standing where she stood now, an exaltation of sense that was ecstasy; when every leaf and every blade of grass shone with a divine translucence; when every nerve in her thrilled, and her whole being rang with the joy which is immanent in the life of things.
What she experienced now (if she could have given any account of it) was exaltation at the other end of the scale. It was horror and fear unspeakable. Horror and fear immanent in the life of things. She saw the world in a loathsome transparency; she saw it with the eye of a soul in which no sense of the divine had ever been, of a soul that denied the supernatural. It had been Harding Powell’s soul, and it had become hers.
Furiously, implacably, he was getting at her.
Out of the wood and the hedges that bordered it there came sounds that were horrible, because she knew them to be inaudible to any ear less charged with insanity; small sounds of movement, of strange shiverings, swarmings, crepitations; sounds of incessant, infinitely subtle urging, of agony and recoil. Sounds they were of the invisible things unborn, driven towards birth; sounds of the worm unborn, of things that creep and writhe towards dissolution. She knew what she heard and saw.
She heard the stirring of the corruption that Life was; the young blades of corn were frightful to her, for in them was the push, the passion of the evil which was Life; the trees, as they stretched out their arms and threatened her, were frightful with the terror which was Life. Down there, in that gross green hot-bed, the earth teemed with the abomination; and the river, livid, white, a monstrous thing, crawled, dragging with it the very slime.
All this she perceived in a flash, when she had turned the corner. It sank into stillness and grew dim; she was aware of it only as the scene, the region in which one thing, her terror, moved and hunted her. Among sounds of the rustling of leaves, and the soft crush of grass, and the whirring of little wings in fright, she heard it go; it went on the other side of the hedge, a little way behind her as she skirted the wood. She stood still to let it pass her, and she felt that it passed, and that it stopped and waited. A terrified bird flew out of the hedge, no further than a fledgling’s flight in front of her. And in that place, it flew from she saw Harding Powell.
He was crouching under the hedge as she had crouched when she had hidden from him. His face was horrible, but not more horrible than the Terror that had gone behind her; and she heard herself crying out to him: “Harding! Harding” appealing to him against the implacable, unseen Pursuer.
He had risen (she saw him rise), but as she called his name, he became insubstantial, and she saw a Thing, a nameless, unnameable, shapeless Thing, proceeding from him. A brown, blurred Thing, transparent as dusk is, that drifted on the air. It was torn and tormented, a fragment parted and flung off from some immense and as yet invisible cloud of horror. It drifted from her; it dissolved like smoke on the hillside; and the Thing that had born and begotten it pursued her.
You may also like