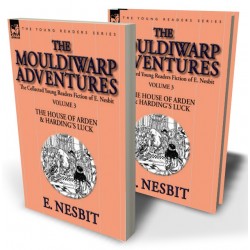 Elfrida crouched on the window-ledge, where the snow lay thick and crisp. It was very, very cold. Have you ever had to jump out of a top-floor window into the dark when it was snowing heavily? If so, you will remember how much courage it needed. Elfrida set her teeth, looking down into black nothing dotted with snowflakes. Then she looked back into a black passage, lighted only by the rushlight the nurse carried.
“Edred’ll be all right?” she asked. “You’re sure he’ll jump all right?”
“Of course I shall,” said Edred, in his new voice. “Here, let me go first, to show you I’m not a coward.”
Of course, Elfrida instantly jumped. And next moment Edred jumped too.
It was a horrible moment because, however much you trusted the Mouldiwarp, you could not in an instant forget what you had been taught all your life—that if you jumped out of top-floor windows you would certainly be smashed to pieces on the stones below. To remember this and, remembering it, to jump clear, is a very brave deed. And brave deeds, sooner or later, have their reward.
The brave deed of Edred and Elfrida received its reward sooner. As Elfrida jumped she saw the snowflakes gather and thicken into a cloud beneath her. The cloud was not the sort that lets you through, either. It was solid and soft as piled eiderdown feathers; she knew this as it rose up and caught her, or as she fell on it—she never knew which. Next moment Edred was beside her, and the white, downy softness was shaping itself round and under them into the form of a seat—a back, arms, and place for the feet to rest.
“It’s—what’s that in your hand?” Elfrida asked.
“Reins,” said Edred, with certainty. “White reins. It’s a carriage.”
It was—a carriage made of white snowflakes—the snowflakes that were warm and soft as feathers. There were white, soft carriage-rugs that curled round and tucked themselves in entirely of their own accord. The reins were of snowflakes, joined together by some magic weaving, and warm and soft as white velvet. And the horses!
“There aren’t any horses; they’re swans—white swans!” cried Elfrida, and the voice of the Mouldiwarp, behind and above, cried softly, “All white things obey me.”
Edred knew how to drive. And now he could not resist the temptation to drive the six white swans round to the front of the house and to swoop down, passing just over the heads of the soldiers of the guard who were still. earnestly pounding at the door of Arden House, and yelled to them, “Ha, ha! Sold again!” Which seemed to startle them very much. Then he wheeled the swans round and drove quickly through the air along the way which he knew quite well, without being told, to be the right way. And as the snow-carriage wheeled, both Edred and Elfrida had a strange, sudden vision of another smaller snow-carriage, drawn by two swans only, that circled above theirs and vanished in the deep dark of the sky, giving them an odd, tantalising glimpse of a face they knew and yet couldn’t remember distinctly enough to give a name to the owner of it.
Then the swans spread their white, mighty wings to the air, and strained with their long, strong necks against their collars, and the snow equipage streamed out of London like a slender white scarf driven along in the wind. And London was left behind, and the snowstorm, and soon the dark blue of the sky was over them, jewelled with the quiet silver of watchful stars, and the deeper dark of the Kentish county lay below, jewelled with the quiet gold from the windows of farms already half-asleep, and the air that rushed past their faces as they went was no longer cold, but soft as June air is, and Elfrida always declared afterwards that she could smell white lilies all the way.
So across the darkened counties they went, and the ride was more wonderful than any ride they had ever had before or would ever have again.
All too soon the swans hung, poised on long, level wings, outside the window of a tower in Arden Castle—a tower they did not know.
But though they did not know the tower, it was quite plain that they were meant to get in at the window of it.
“Dear swans,” said Elfrida, who had been thinking as she sat clutching her Brownie, “can’t we stay in your carriage till it’s light? We do so want to take a photograph of the castle.”
The swans shook their white, flat, snake-like heads, just as though they understood. And there was the open window, evidently waiting to welcome the children.
So they got out—very much against their wills. And there they were in the dark room of the tower, and it was very cold.
But before they had time to begin to understand how cold it was, and how comfortable they were likely to be for the rest of the night, six swans’ heads appeared at the window and said something.
“Oh,” said Elfrida, “I do wish we’d learned Swanish instead of French at school!”
But it did not matter. The next moment the swans’ heads ducked and reappeared, holding in their beaks the soft, fluffy, white rugs that had kept the children so warm in the snow-carriage. The swans pushed the rugs through the window with their strong, white wings, and made some more remarks in swan language.
“Oh, thank you!” said the children. “Goodbye, goodbye.”
Then there was the rush of wide-going wings, and the children, tired out, cuddled on the floor, wrapped in the soft rugs.
Books from this set
You may also like