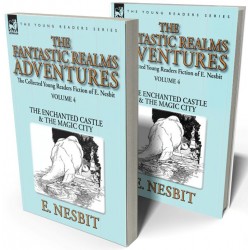 There can be little doubt that contemporary authors of children’s fiction whose stories place ordinary children in tales of high adventure, in fantastical lands populated by exotic and mythical characters and creatures, owe an abiding debt to Edith Nesbit. It is widely accepted that she originated this form of fiction for the young, and has left us not only her own classics such as ‘Five Children and It’ and ‘The Phoenix and the Carpet,’ but also potentially offered inspiration for perennial favourites by other writers from, ‘The Lion, the Witch and the Wardrobe’ to the internationally successful Harry Potter series. This fourth special volume of her stories from Leonaur brings together ‘The Enchanted Castle’ and ‘The Magic City.’ Although not strictly part of a series these two books have a common theme which is central to the power and potential for imagination in children’s play. Young heroes and heroines embark on their adventures in real life places which are then magically transformed into fantastic realms. As always these novels offer mature readers a nostalgic passport to more innocent times and introduce young readers to Edith Nesbit’s wonderfully crafted descriptive and evocative but economic prose.