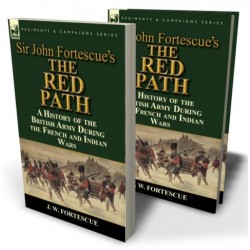 War among the forests, mountains and lakes of North America

Among British Army historians the reputation of Sir John Fortescue stands virtually without equal. His comprehensive fourteen volume history is a work of unparalleled achievement in its field. Fortescue combines thorough source material research with insightful academic observation of the conduct of the campaigns he describes and of the decisions, errors and strategic and tactical options of their principal protagonists. The Leonaur editors have carefully selected passages from Fortescue’s magnum opus to create a series of books, each focusing on a specific war or campaign.
It might rightly be claimed that the Seven Years’ War was the first ‘world war.’ Certainly it defined the world as we know it today. It underpinned the expansion the British Empire and ensured that the English language—rather than French—would become the world’s dominant language. The war as it was fought in North America, involving native American Indians on both sides, has particularly fascinated military historians ever since. Fortescue brings his astute perspective to the subject without bias, and readers may be surprised to learn of his view that American colonial troops essentially ‘saved British bacon.’ For the first time Fortescue’s incisive history of the French and Indian Wars is available in a single volume and no library of the period will be complete without his direct analysis and critically observed view of the events and personalities of this epic period in Anglo-American military history. This Leonaur exclusive volume has never been available before, and Fortescue’s original text has here been enhanced by the inclusion of  maps and diagrams.
Leonaur editions are newly typeset and are not facsimiles; each title is available in softcover and hardback with dustjacket.