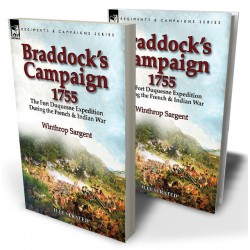 The road to disaster in the New World wilderness

The American theatre of the Seven Years War known as ‘The French and Indian War’ has become a popular subject for military history students and enthusiasts. It pitted the great powers of Britain and France against each other on a continent which was a wilderness sparsely populated by primitive Indian tribes and colonists who were loyal to the antagonists according to their nation of origin. Everyone with an interest in this war has heard of Braddock’s Campaign of 1755, which terminated on the Monongahela River. This was a catastrophic defeat for the British early in the conflict which illustrated undeniable truths and taught brutal lessons. The French and their native allies demonstrated they understood how warfare should be fought in the great woodlands, while the British Army and its commanders fatally misunderstood how different this war would be from one fought on European battlefields. Caught in ambush, General Edward Braddock was killed, his force severely defeated. Only some of the colonial militia loyal to the British present, which included George Washington, acquitted themselves capably and in a manner which, fortunately for the cause of the Crown, they maintained for the rest of the war. This book, in its lengthier original form, included several first-hand accounts by those who were present. These have been removed to focus on the author’s excellent history of the historical events. The eye-witness material has been included in Leonaur’s Narratives of the French and Indian War series. Sargent’s text has been enhanced with maps and illustrations which were not present in the original work.

A terrified soldier, escaping the fate of his fellows, returned to the fort with the sad tidings of Jumonville’s discomfiture; and a council of war, to deliberate on what next should be done, was instantly assembled by Contrecoeur. Here the opinions of all were given in writing. The fiery Coulon-Villiers (known for his prowess as Le Grand Villiers), burning to avenge after the fashion of the savages his brother’s death, was for violent and vindictive measures: the more safe and moderate advice of M. de Mercier prevailed. (I. Pouchot.) The desire professed on this occasion, to avoid everything which might be construed into an indefensible violation of the letter of the Treaty of Utrecht, when its spirit and meaning were already infringed by his very presence on the ground, shows how clearly the Frenchman anticipated the approaching war; and his anxiety to preserve, if not peace, at least appearances with the world. Villiers, with some six hundred men, was despatched to meet Washington, and Mercier accompanied him as second in command. (The accounts of their number vary from three to nine hundred men, besides Indians. Among the latter were many Delawares and others who had hitherto lived on terms of personal friendship with the English. Vide Min. Penn. Col. Council, Vol. VI.)
On the 29th of June, Washington, who was then at Gist’s plantation, received intelligence of their advance; and his council of war resolved to await the attack at that spot. Entrenchments were at once undertaken; two detached parties under Captains Lewis and Polson were recalled; and an express sent to the Great Meadows to summon Captain Mackay, with the Independent Company from South Carolina. Mackay marched into camp that night, and the next morning Lewis and Polson came in. Apprised now of the enemy’s overwhelming force, a second council on the 30th of June resolved, with one voice, to retreat to their former position at the Great Meadows. Two miserable teams and a few pack-horses being all their means of transporting their ammunition, the officers at once added their own steeds to the train; and, leaving half his baggage behind, Washington, for four pistoles, hired some of the soldiers to carry the remainder.
For twelve weary miles over the Alleghanies did the Virginians drag with their own hands the seven swivels that formed their park; the Independents obstinately refusing to bear any share of the burthen, whether of drawing guns, carrying ammunition, or clearing the road. On the 1st of July, the party arrived at the Great Meadows in such a state of fatigue that, unless their stores were abandoned, it was absolutely necessary for them to pause there for a few days. They had a plenty of milch-cows for beef, but no salt to cure their meat, so it was not possible to lay in a stock of salt provisions; and as for bread, though they had been eight days without it, the convoy from the settlements brought but a few bags of flour, not more than enough for five days. But learning that the two Independent Companies of New York were arrived at Annapolis on the 20th of June, they concluded to make a stand here, in hope of receiving a speedy reinforcement.
The spot selected for the works was well chosen; and to these rude defences was given the suggestive title of Fort Necessity. To Robert Stobo, a captain in the Virginia Regiment, the merit of being their contriver is attributable. The fort was a log breast-work 100 feet square, surrounded in part by a shallow ditch; and was commenced immediately on Washington’s arrival. As day broke on the morning of the 3rd of July, the near approaches of the enemy were proclaimed by some of their scouts shooting down an English sentry; and at 11 a.m., the whole force came in sight and invested the petty fortress. Expecting to be stormed, the Independents were posted in the ditch, the Virginians being drawn up within their lines, intending to retain their fire till it was certain to take effect.
The enemy not adopting this course, however, but sheltering themselves among the trees that crowned a neighboring hill, the men were withdrawn to the cover of their works, and a dropping, desultory fire was kept up on either side during all the day. When night fell, and their ammunition (which only amounted to a handful of ball each, and powder in proportion), was nearly exhausted, the French repeatedly called a parley, which at last was listened to by the incredulous English; and a capitulation was speedily arranged.
You may also like