Fontenoy, Britain & The War of Austrian Succession, 1740-1748, With a Short Account of the Battle of Fontenoy 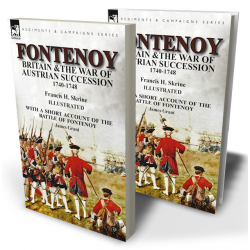 The War of Austrian Succession and its most notable battle

The Battle of Fontenoy was one of the most notable engagements in The War of Austrian Succession. An allied army, from Britain, Hanover, the Dutch Republic and the Holy Roman Empire, fought the French army under Maurice de Saxe in the vicinity of Tournai, Flanders in May 1745. Notably the so called ‘Pragmatic Allies’ were commanded by Prince William, Duke of Cumberland, youngest son of George II, who is best remembered for putting down the Jacobite Rebellion at Culloden in 1746. On the French side, both the monarch, Louis XV, and the Dauphin were present. Cumberland’s grand attack failed and the French held the field at the conclusion of the engagement, though at a huge cost in lives for both armies. This excellent book examines this battle, and its times, in detail. It includes two overviews of the battle (one by James Grant) and also includes an examination of the Battle of Dettingen and Wade’s Campaign, the Scottish Rising, the Siege of Pondicherry, a review of regiments engaged in Flanders and the services of the Irish Brigade during the War of Austrian Succession. This exclusive edition benefits from the inclusion of maps and illustrations which were not present in original editions of these works.