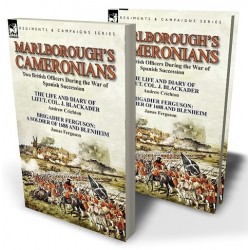 At war with Marlborough against the French

There can be little doubt that John Churchill, Duke of Marlborough, stands high in the pantheon of the greatest British military men. His campaigns, particularly during the War of Spanish Succession (1701-14) where he fought in collaboration with another military genius of his age, Prince Eugene of Savoy, included iconic battles which resonate to the present day. Perhaps foremost among those was the Battle of Blenheim, 1704, in which allied victory was grasped—at some cost—from a French force whose position on the field of conflict could barely have been better. It is certain that Marlborough owed much of his success—as did Wellington a century later—to the courage of the soldiers of the British army who fought under his command. This special Leonaur edition includes narratives about two officers of one of the redoubtable British regiments, the hard fighting and ardently religious Scots of the Cameronians—the 26th Regiment of Foot. The first narrative chronicles the career and includes the campaign diary of John Blackader, whose words have often been quoted in descriptions of the war. The second work describes the career of James Ferguson another renowned Scottish officer and is included here to provide a contrasting perspective on Blackader’s more expansive writing.
Leonaur editions are newly typeset and are not facsimiles; each title is available in softcover and hardback with dustjacket.

These preparations were the harbingers of the ever memorable Battle of Blenheim or Hochstet. After taking possession of Schellenberg the Allies seized Donawert, which had been abandoned by the Bavarian garrison. The Elector had retired with the shattered remains of his army under the cannon of Augsburg. Finding it impossible to dislodge him from this strong position, the Duke of Marlborough, eager to profit by his recent victory, resolved to cut him off from all supplies. He entered the Bavarian territory and took several places by storm. He ravaged the whole country, as far as Munich, with fire and sword, in order to compel the Elector to sue for peace or relinquish his connections with France. A negotiation was begun, but without sincerity on the part of the Elector, who only wished to prolong the truce until the French Army should march to his assistance.
On the 4th of August, Marshal Tallard joined him with 22,000 horse and foot. Reinforced by these new auxiliaries he left Augsburg, with the intention of surprising Prince Eugene, who, with one of the Confederate armies, lay encamped on the plain of Hochstet. The Duke of Marlborough, with his accustomed vigilance, soon penetrated the design of the enemy, and on the 12th he formed a junction with Prince Eugene. Being now in a condition to cope with their adversaries, who by this time had encamped very near them, the two Confederate Generals proposed to attack them, though they were advantageously posted, their right flank being covered with the Danube and the village of Blenheim, and their whole front defended by a rivulet.
This resolution being adopted, preparations were made with the utmost diligence. The drum beat about midnight, and by two in the morning, the whole army was in motion; but it was seven before they could be drawn up in order of battle. About noon, orders were given for the general attack, which was begun on the left, at the village of Blenheim, by the British infantry and four battalions of Hessians, who boldly advanced to the muzzles of the enemy’s muskets, some of the officers exchanging sword-thrusts with the French through the palisades. But the tremendous fire made such havoc among them, that they were forced to retreat, leaving nearly one third of their number dead on the spot. A second assault, in which Captain Blackader was wounded, was made by Brigadier Ferguson, but with no better success, though they had returned three or four times to the charge, and were as often repulsed. In this action, the Cameronian Regiment suffered severely, having about twenty officers either killed or wounded. While the infantry were thus occupied, the cavalry passed the rivulet advanced up the hill where the enemy’s horse were posted, and put them to the rout, notwithstanding they rallied several times.
It is not requisite here to enter into the particulars of this celebrated battle; suffice it to say, that after an engagement of five hours, victory declared for the Allies, although they attacked with a visible disadvantage, and after a march of ten hours in an extremely hot day. The loss of the French was computed at 30,000, and that of the Allies about 12,000, killed, wounded, and prisoners.
Thirty battalions of the enemy threw themselves into the Danube to escape, and perished before the eyes of the conquerors. Twenty-eight battalions, and twelve squadrons of horse surrendered to the British, who, after the fatigues of the day, were obliged to continue on their arms all night to guard the prisoners, as there was no place of security in the country where they could be put. They were kept enclosed in a lane or hollow square, formed by the troops at the village of Blenheim. On this duty. Captain Blackader mentions himself as one of the officers on command.
******
August 2. Many deliverances I have met with, but this day I have had the greatest ever I experienced. We fought a bloody battle, and, by the mercy of God, have obtained one of the greatest and completest victories the age can boast of. In the morning, while marching towards the enemy, I was enabled to exercise a lively faith, relying and encouraging myself in God, whereupon I was easy, sedate, and cheerful. I believed firmly that his angels had me in charge, and that not a bone should be broken. During all the little intervals of action, I kept looking to God for strength and courage, and had a plentiful through-bearing, both to keep up my own heart, and help to discharge my duty well in my station.
You may also like