Home » Non Fiction » 18th Century Wars » American War of Independence » The Two Lives of Flora MacDonald: The Life of Flora Macdonald, and Her Adventures with Prince Charles by Alexander Macgregor & Flora Macdonald in America by J. P. Maclean with a Copy of the Declaration of Miss MacDonald Apple Cross Bay, July 12th 1746 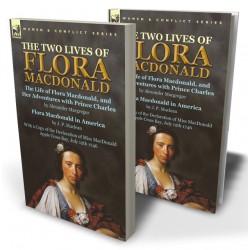