The Military Career of Field Marshal Jeffery Amherst: the War of Austrian Succession, the French & Indian War, the Ohio Indian War & the American War of Independence 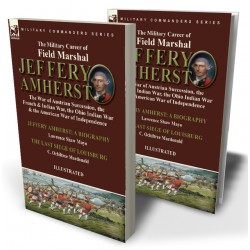 Although this book is a biography of Jeffrey Amherst’s entire life it focusses on his career as a soldier actively engaged in the field. He began his service in 1735 as an ensign in the First (later the Grenadier) Guards and saw action during the War of Austrian Succession at Dettingen and Fontenoy. When the Seven Years War broke out Amherst found himself in Europe in 1757 in command of Hessians fighting at Hastenbeck. In North America, which became the main stage for this period of his career, he participated in all the principal conflicts that took place during the 18th century: the French and Indian War (the Seven Years War), Pontiac’s (the Ohio Indian) War to deprive Bourbon France of its American holdings and the American Revolution (the American War of Independence).This unique Leonaur edition concludes with an erudite and thorough analysis of the Siege of Louisburg, a notable victory for the British commanded by Amherst, written by the military historian, Macdonald. Includes for the first time illustrations and photographs not previously included with the text.

Meanwhile Colonel Amherst, who had sojourned in England for the past nine months with his Hessian charges, was despatched once more to Germany. Early in March, 1757, he was again in Cassel with its parks and palaces, and he remained in that vicinity for several weeks, attending to the Hessian contingent resident there. In May the commissary’s duties called him to Stade to superintend the disembarking of the German troops, who, having defended Britain for a year, were now returning to the Continent to fight under the Duke of Cumberland. By the middle of the month, they were safely landed and sent on their way to the camp at Hameln on the Hanoverian frontier, a town more famous for its Pied Piper and its rats than for this military establishment. Thither Amherst followed them shortly and placed himself under the command of his royal friend. (State Papers Foreign, Military Expeditions, Vol. 27.)
The forces of which the duke took command numbered about 50,000 men, mostly Hanoverians and Prussians with a generous admixture of Hessians, Brunswickers, and other German levies, and with them he was expected to protect the electoral dominions. This Army of Observation, as it was appropriately called, was concentrated at Bielefeld, late in April. Cumberland’s task, however, was an ungrateful one: in the first place the troops were ill-assorted; secondly, they were devoid of anything resembling esprit de corps; and worst of all, they believed themselves over-matched by the French, and predestined to defeat. (Torrens’ History of Cabinets, ii.) The unhappy commander manoeuvred indecisively until the French general, Marshal d’Estrées, forced a battle upon him at Hastenbeck, on the north bank of the Weser.
This engagement took place on July 26, 1757, and Jeffery Amherst, who was present with the Hessian mercenaries in his charge, once more saw his chief go down to defeat before the enemy. Although the Duke of Cumberland was Amherst’s junior by four years, he had grown old and unwieldy before his time. At Hastenbeck his failing sight compelled him to depend upon other eyes than his own, and the result was disastrous. With a loss of 1,500 men, Cumberland retreated steadily down the course of the Weser to Verden, which lies in the heart of the Electorate. His defeated army was completely demoralised. Rations were short and the soldiers left the ranks to pillage and to indulge in all kinds of excesses. (Richard Waddington’s La Guerre de Sept Ans, i.)
In the meanwhile, the French swept over Hanover unresisted, plundering and pursuing, until Cumberland on the twenty-first of August proposed a suspension of hostilities. But Richelieu, who had succeeded d’Estrées as commander-in-chief of the enemy’s forces, only laughed at the overture of his downcast opponent, and the chase continued across the moors towards Stade, near the mouth of the Elbe.
You may also like