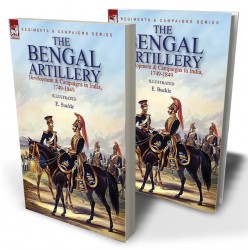 The guns and gunners of the Honourable East India Company

Until the creation of 'The Raj', following the Indian Mutiny of 1857, the British held India with three native armies, supported by the troops of the British regular army, representing the presidencies of Madras, Bombay and the subject of this book, Bengal. Although all three presidencies could field troops with all the arms of the period, none of them possessed the élan of the Bengal Artillery. Indeed, the 'Red Men' of the Bengal Horse Artillery were a corps d'elite with few equals in military excellence or style. This book considers the history of both the Bengal Field and Horse Artillery from their inception in 1749, through the wars of the early nineteenth sentry as the British fought to claim India to the Anglo-Sikh Wars which concluded in 1849. Captain Buckle's book has long been considered the definitive work on its subject and covers formation, development, equipment and the campaigns of the Bengal Artillery in detail.

During the night of the 31st, some troops with two 9-pounders on elephants ascended the ridge to the right of the enemy’s position, moved along the crest at daylight, and bringing the guns into play, the enemy fled, leaving the city at our mercy. And here the operations of this army may be said to terminate; disease, engendered by the pestilential locality, soon raged most fearfully, and converted the town into a large cemetery. Small detachments were sent against Ramree; Lieutenant Hotham, with two guns, engaged in the attack, which was at first unsuccessful; it was, however, finally occupied, as was Aeng, a station on the pass leading through the hills.
In the following cold season reinforcements were sent, among them the 4th company 4th battalion, Lieutenants Rutherfurd and Buckle, and it was intended that the force should attempt the passage of the hills, and for that purpose it was partially collected at Amherst Island; but the difficulties and want of transport were too great, and the idea was abandoned. Arracan was evacuated, and the troops located at Ackyab, an island at the mouth of the Koladine and Myoo Rivers, Cheduba, Ramree, and Sandoway, and finally withdrawn in 1826.
That the passage of the hills was possible, there is no doubt; two regiments from Prome succeeded in the attempt by the Aeng pass, while Lieutenant B. Browne; Lieutenant Brady, of artillery; and Captain Trant, deputy quartermaster general, reached Arracan by another, early in 1826.
In 1823, a squadron of gun-boats was sent to cruise on the Burrampooter, probably with the intention of protecting that frontier from threatened incursions of the Burmese. Captain Timbrell, Lieutenants Bedingfield and Burton, were with this flotilla.
On the Sylhet frontier detachments of the 6th battalion were with the army, Captain J. Scott, Captain C. Smith, Lieutenants Brind and Lane, Lieutenant Turton, adjutant; but this force never came in contact with the enemy. The country proved impassable.
Lieutenant Huthwaite was with a detail of native artillery employed against Munneypoor, and engaged in the successful attack on the enemy’s blockaded position at Daoudputlee.
Let us now return to the Rangoon Army. Such preparations as circumstances admitted of being made, the army advanced on the 11th February, 1825, in two columns, one by land and one by water: the main portion of the artillery was with the former; with the latter, Lieutenant Paton and some of the rocket-troop were placed in the Diana steamer.
The inadequacy of the supplies of the land column may be easily imagined when it is stated that it was with the utmost difficulty Captain Lumsden obtained four bullocks for his forge-cart!—its value, however, was repeatedly acknowledged, and its aid gladly sought, almost daily, to repair public carriages of every department.
To the water column was intrusted the operations of dislodging Bundoola from his strong position at Donabeu, while the land column pushed on as rapidly as possible for the capital. The enemy were driven from their stockade below Donabeu, but on approaching that position, it was found far more formidable than represented. The attack on it proved unsuccessful, and Sir Archibald was forced to retrograde to assist in its capture. On the 1st April, the attack was renewed by land and by water; from the latter, a brisk cannonade and effectual flights of rockets were poured in, and the batteries on the land side were equally effectual; the rockets, however, then failed; the heat and shaking they had been exposed to in the march rendered them nearly or worse than useless.
One, however, is claimed as having decided the day, by killing Bundoola. His energy alone kept the enemy together, and after his death they fled from the stockades during the night. The march was resumed, and Prome occupied by the army for the rainy season. Here Lieutenant Thompson died on the 11th May.
During the rains, Lieutenant Timmings came round to Dum-Dum for his own health, and returned in October, carrying back with him reinforcements in men and horses for the artillery; Lieutenants G. Graham, Daniell, Begbie, and Brady also accompanied him.
The enemy rallied, and towards the middle of October had nearly surrounded Prome with stockades.
On the 2nd December, Sir Archibald Campbell attacked and defeated them, following up his success the next day. The horse artillery were pushed on in advance through nullahs and over rocks, to obtain a position bearing well on the enemy at Nassadee, and during the cannonade an howitzer missing fire twice, Captain Lumsden directed the shell to be withdrawn; this was done, but the fuse having ignited, the shell burst, just as it reached the muzzle, killing a lascar, wounding a gunner and Captain Lumsden; but he immediately rallied, and continued, in spite of his wound, directing the operations of his battery. Six guns, manned by the 3rd company 5th battalion, with Lieutenant-Colonel Pollock, Captain Biddulph, and Lieutenant Laurenson, were also engaged in this successful attack.