Sir John Fortescue’s The Trying of Souls: the British Army during the American War of Independence 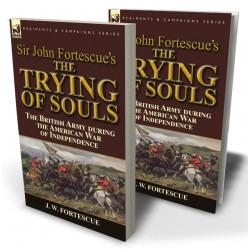 The British Army at war with revolutionary America

A few years after British regiments had fought to defeat the French in North America, and suppress the power of the native Indian tribes of the Ohio, came the conflict that separated the English colonies of the New World from the Crown forever. The blame for war substantially resided with the British government, which believed, against all the lessons of history (including their own), that the continued loyalty and obedience of peoples could be demanded and expected irrespective of any fundamental injustices to which those people might be subjected. A number of the colonies took issue with that presumption and hostilities—after strenuous attempts on the part of the aggrieved to avoid them—broke out. Independence was declared, and an under resourced British Army, far from home, burdened by political intransigence, indifference and logistic inefficiency, was called upon to rectify matters. The British Army performed better than might have been expected given that it was unsupported and fighting upon its enemy’s ground, though defeat was probably inevitable.