Sir John Fortescue’s A Triumph of Banners: the British Army and the War in Canada and the United States of America 1812-14

Home » Non Fiction » 19th Century Wars » War of 1812 » Sir John Fortescue’s A Triumph of Banners: the British Army and the War in Canada and the United States of America 1812-14 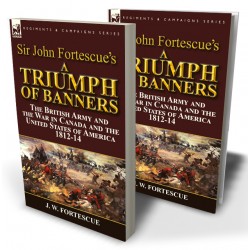 The battles that defined North America

In 1812, the British Army, together with the armies of its European allies, was engaged against the might of Napoleon’s imperial France. Since the loss of the New World colonies there had been little affection between Britain and the United States of America. The Americans, having consolidated their nation, and looking to expand their influence, invaded Canada. The Canadians remained staunchly British in their allegiances and decisively repelled the American Army. A British Army expeditionary force, including soldiers who had recently defeated Napoleon’s French Army in Iberia, was despatched and the Americans suffered the ignominy of the occupation of Washington and the burning of the White House. Finally, an American force under Jackson, inflicted a bloody defeat on the British at New Orleans. The British commander, Pakenham, who was Wellington’s brother-in law, was killed in the battle. Tragically, and unknown to the protagonists, peace terms had been signed two weeks previously in Europe. Nevertheless, America had redeemed itself with an iconic victory, Canada had demonstrated it was capable of holding its own ground and the British Army had once again shown its renowned mettle. The War of 1812 was a war in which, unusually, all nations who had fought in it were comparatively satisfied with its outcome.