The King’s, Liverpool Regiment of Foot: a Regimental History from 1685-1881 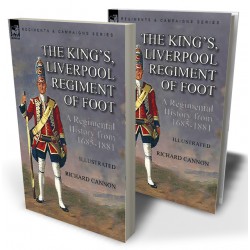 The story of Liverpool's own regiment

This book recounts almost 200 years of the early history of one of the oldest regiments of the British Army since it was formed in 1685. In 1751 it was numbered the 8th (Kings) Regiment of Foot and the regiment holds the distinction of being one of only four regiments in the British Army which have been affiliated to a city rather than a county. As a regiment with such a long history the King's Liverpool Regiment served in many campaigns. These include Monmouth's Rebellion, The War in Ireland including the Battle of the Boyne, The War of Spanish Succession, The Jacobite Rebellion including at Culloden, The American War of Independence, The French Revolutionary War, The Napoleonic Wars, The War of 1812 in America, The Indian Mutiny of 1857, and the final campaign covered by this book The Second Afghan War. This is a substantial and thorough regimental history and is recommended.

Section 14.—Abroad, 1760-1763.
The regiment landed at Bremen in June, and on the 20th of that month, it joined the camp of the Allied Army, commanded by Prince Ferdinand of Brunswick, near the banks of the Eder, in the vicinity of Fritzlar, in the principality of Lower Hesse.
The regiment took part in the movements and skirmishes of the main army, previous to the Battle of Warbourg, on the 31st of July, on which occasion the grenadier company was sharply engaged, and highly distinguished itself; but the French were driven from their position with severe loss, before the main body of the British infantry arrived at the scene of conflict. The grenadier company had one sergeant and two private soldiers killed; Captain Wilkenson and thirteen private men wounded, and one man missing.
The French having been driven through Warbourg, and chased across the River Dymel, where a number of men were drowned in their haste to escape, the King’s was subsequently encamped behind the Dymel; and while in this position, the grenadier company was detached, with several corps of cavalry and infantry, across the river, and engaged, during the night of the 5th of September, in surprising a body of French in the town of Zierenberg. After some sharp fighting in the streets, about forty French officers and three hundred soldiers were made prisoners, and the allies returned to their camp at Warbourg. The grenadier company of the King’s was subsequently detached to the Lower Rhine, and was engaged, on the 16th of October, in an attack on the French troops at the convent of Campen, near Rhineberg. It formed part of the grenadier battalion, under Lord George Lennox, and had Lieutenant Morrison wounded, also several private soldiers killed and wounded.
In December, the regiment went into cantonments, in villages near the River Weser.
1761. From its village cantonments the regiment was withdrawn in February, and proceeding through a deep snow into Hesse Cassel, was engaged in several operations. The French were forced to surrender several fortified towns and extensive magazines, and the allies returned in March to their former quarters.
In June, the regiment again took the field; it was formed in brigade with the Twentieth, Twenty-Fifth, and Fiftieth Regiments, under Major-General Townshend, in the division commanded by Lieutenant-General Conway; the grenadier company was in the division under the Marquis of Granby. On the 15th of July, the French attacked the Marquis of Granby’s division at Kirch-Denkern, and were repulsed. They renewed the attack on the following day; the King’s was posted on the high grounds between Illingen and Hohenover, and a detachment stationed in front had a slight skirmish with the enemy, and had one private soldier killed and one taken prisoner. The French were repulsed, and the grenadier battalion, of which the company of the King’s formed part, took the regiment of Rougé (formerly Belsunce) prisoners, together with its cannon and colours.
The regiment was subsequently employed in numerous operations in the bishopric of Paderborn, and on the River Weser, and took part in several skirmishes. In November, it was engaged at Eimbeck, in the electorate of Hanover; it was subsequently encamped on the banks of the Have, near Eimbeck, and in December marched into cantonments in the bishopric of Osnaburgh.
1762. During the campaign of 1762, the King’s was formed in brigade with the Twentieth and Fiftieth Regiments, under Major-General Mompesson, and it took part in the surprise and discomfiture of the French Army at Groebenstein, on the 24th of June, on which occasion it formed part of the centre column, under Prince Ferdinand of Brunswick. It crossed the Dymel at four o’clock in the morning, and, after a long march, gained the front of the French camp, and opened a sharp fire. The enemy made a precipitate retreat to Cassel, and one division was surrounded and made prisoners in the woods of Wilhelmsthal. (The casualties of Barrington’s regiment (the King’s) was one non-commissioned officer wounded.—London Gazette 20th June, 1762.)
This success was followed by other advantages, and the King’s Regiment was actively engaged in numerous operations, and in several skirmishes. The campaign concluded with the siege and capture of Cassel. This event was followed by a suspension of arms, and a treaty of peace was afterwards concluded at Fontainebleau.