Deeds, Not Words!—the Experiences of Two Suffragettes in the Struggle for the British Women’s Vote 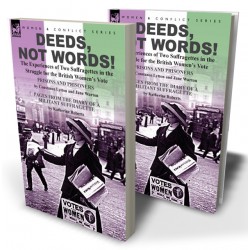 To commemorate the centenary of the passing by the British Parliament of the Representation of the People Act, Leonaur is publishing a series of books which celebrate the struggle for political enfranchisement by militant women. Following the passing of this pivotal act in 1918 British women over the age of 30 years, who qualified by means of holding property, were granted the right to vote in British parliamentary elections. This momentous achievement inexorably led, a decade later, to the right to vote for all British women over the age of 21 years. This was a struggle hard won through much campaigning, protest and suffering by women activists. In this volume two British women have written about their experiences in the cause for women’s suffrage. These accounts will be a revelation to many modern readers, since they are accounts not just of courage, resolution and conviction, but of imprisonment and suffering inflicted upon women who, by modern standards, were demanding nothing more than their rightful voice and standing in early 20th century society. These events, which took place in very recent times, provide vivid perspectives on liberties which are usually taken for granted by those who have always known them.