The Desert March to Relieve Gordon: the Nile Expedition 1884-5 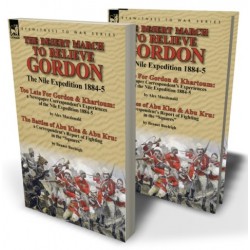 Two special correspondents during the war in the Sudan

The profession of war correspondent has always been a perilous one. Fortunately for students of the military history of the early Victorian era, journalists were prepared to travel to inhospitable lands to tramp alongside the troops in order to report momentous events, campaigns and battles. Their well-crafted reports combined sharp observation, with a keen intellect and understanding of the events they witnessed with the ability to communicate clearly. This book brings together two accounts of the abortive Nile Expedition to relieve Gordon in Khartoum. There is no doubt that the Canadian, Macdonald, was a fine writer who transported his readers through his immediate and graphic descriptions of long, weary marches, heat and dust. His account of the Mahdist attacks on the British squares is particularly evocative with the danger, terror and chaos of close quarter fighting in the desert described in fine detail. The second piece, by Bennet Burleigh, has rarely been published in this form and provides readers with an interesting perspective of pitched battle from another fine correspondent and eyewitness. This was a hard campaign in which two other journalists were killed in battle in very close proximity to these writers. A unique Leonaur edition and highly recommended.
Leonaur editions are newly typeset and are not facsimiles; each title is available in softcover and hardback with dustjacket.