The Schleswig-Holstein War Between Denmark and the German States 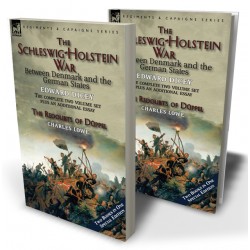 Denmark, Prussia and Austria at war—2 volumes in one special edition

Europe is familiar with wars which have ostensibly arisen from issues of succession among its monarchies. Most of these provided nothing less than a pretext for grasping advantages, and the Second Schleswig-Holstein War, fought in 1864 following the unclear succession of the Danish monarchy, can be seen as one of the several conflicts orchestrated by Prussia and Austria to establish themselves as dominant powers in Europe. This was not the first time the Schleswig and Holstein question had resulted in bloodshed. Originally affiliated to Denmark, the status of the duchies became more complicated, and the situation confrontational, as Denmark broke treaties in order to force integration. Outrage among the populations of the duchies escalated, since ethnic divisions had incrementally grown, making allegiances to one side or the other evident by trade, culture and language. Inevitably when the dialogue failed war was inevitable. Denmark was the underdog when it came to military might and proficiency, and the Battle of Dybbol resulted in Prussian victory. This in depth study of a lesser known European ‘small war’ was written by a journalist who was ‘on the spot’ throughout the conflict, and it benefits not only from an understanding of the causes of the war, but also from closely observed personal experience as events unfolded and escalated towards battle.