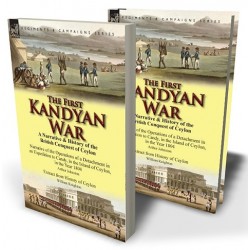 The battle for Ceylon

During the first decade of the 19th century the struggle for imperial domination still raged across the globe. Britain and France were at war as the tide that swept away the Bourbon monarchy in bloody revolution gained momentum under the genius of Napoleon Bonaparte and was felt from Europe to the East and West Indies. Britain in dominating the Indian sub-continent was in conflict with martial cultures who often had French backing. Here the future Duke of Wellington would make his name before his greater military glories in Iberia. The tear-drop shaped island of Ceylon a rich resource of spice, tea and other exotic trade goods—and a country which would add another eastern jewel to the imperial crown—had, of course, not escaped Britain’s notice. Predictably, the indigenous population, particularly in the form of the rulers of the kingdom of Kandy, took issue with the prospect of British rule and opposed British Army regular troops, supported by the natives of the Honourable East India Company’s army, with force. This book recounts a very little reported campaign to subjugate the Kandyians. It was a savagely a war fought over difficult terrain and one which did not decide who would rule Ceylon. This book will fascinate those interested in the history of warfare during the Napoleonic period and the story of the campaign is supported in this special Leonaur edition by an historical overview of the period to provide a first hand account context and understanding of the wider conflict.
Leonaur editions are newly typeset and are not facsimiles; each title is available in softcover and hardback with dustjacket.