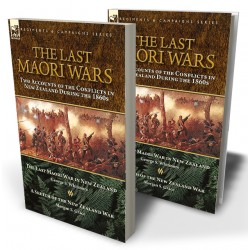 A history and personal experience of the conflicts against the Maoris

This special Leonaur edition brings together two smaller works on the Maori Wars for interest and good value. The first account deals with the history of one of the final wars between the colonial forces and the Maoris in the 19th century which has been called, ‘Te Kooti’s War’. It was fought on the mountainous and heavily forested east coast and central regions of the North Island between 1868-72 and is related by George Whitmore, the officer commanding the imperial force. The second book is the personal account of a British Army surgeon who arrived in New Zealand in 1860 and became immediately involved in the Taranaki Campaign. This is a lively account full of incident and riveting anecdotes covering almost a decade of service.