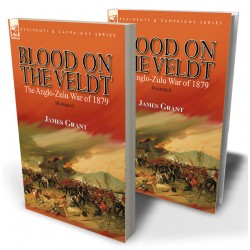 A contemporary account of disaster and retribution in South Africa

This account of the Zulu War has the advantage of being written just five years after the events it describes took place, which enabled the author to consult participants and refer to recent documents in the most immediate way. It also contains references to personalities and many details of events which have been omitted from more modern texts. Many quotations by those who served in the campaign are also included, including from the Zulus who took part in the fighting. However, this account was written by an English author at a time when the British Empire was at its most powerful. He held unashamedly imperial sentiments  so this is not the place to expect a balanced political view by contemporary standards. Nevertheless, Grant’s text is riveting and deserves the attention of all those interested in the subject. Grant also includes a full account of the operations against Sekukini which took place after the capture of the Zulu monarch, Cetewayo. Illustrations which accompanied the original text have been retained and enlarged. The text originally appeared in ‘Recent Battles on Land and Sea’ (1884).

On that day it was reported by the native waggon drivers that Umbelini’s people were gathering in arms. The camp has been described as being “pitched in a most dangerous position, with its face towards some high ground, covered here and there with dense bush, while its rear was resting upon the swollen river, across which Lieutenant Harward and thirty-four men were posted. No particular precautions appear to have been taken, excepting that a sentry was posted about fifteen paces from the front of the camp, on the Derby side,” according to one account; or, according to another, with the exception of a guard stationed on each bank, each furnishing two sentries, but no pickets, the force being probably too slender to provide them.
On the morning of the 12th, at half-past four, while a thick haze rested on the swollen river, a shot was heard from the unfortunate sentry, while he shouted, mechanically, “Guard, turn out!” at a time when the officers and men on both sides of the river “were lying asleep and undressed.” The shot and call made all stand to arms, for which there was barely time, as a force of 4,000 Zulus led, it is said, by Umbelini, was upon them!
Lieutenant Harward placed his thirty-four men under cover of a solitary waggon on his side, and made what dispositions he could to fire on the enemy’s flank, while amid the dim light and gauzy mist, the whole valley could be seen swarming with dark-skinned savages, who at once surrounded the waggons, and assegaied the soldiers, in some instances ere they could leave their tents. The butchery—for it was no fight—was soon over, since all was confusion in a moment
Captain Moriarty was killed just as he left his tent, sword in hand, and his detachment on the left bank, being completely surprised, could offer no resistance to an attack so sudden and overwhelming.
The party on the other bank, taking advantage of the cover afforded by the waggons and also by some ant-hills, near the Intombe, opened a close fire on the Zulus, but failed to prevent 200 of them from crossing.
Lieutenant Harward, who commanded the party on the right bank, ordered his men to fall back on a farmhouse in their rear, and mounting his horse, galloped off to Luneberg for aid, leaving his handful of men to struggle as best they could without an officer to lead them.
Meanwhile, Colour-Sergeant Anthony Booth, of the 80th, did what Harward should have done. He rallied the few men who survived on the south bank of the river, and covered the retreat of fifty soldiers and others. The commanding officer of the 80th reported that, but for the coolness and bravery of this non-commissioned officer, not a man would have escaped with life; and so, Sergeant Booth was awarded the Victoria Cross.
The Zulus followed his party, consisting of only ten men, for three miles, but so bold was the front he showed, that he held them in check and retired without further loss. His resolute valour secured the escape of several fugitives from the left bank, who were without arms and some without clothes, and who were now in headlong flight for Luneberg.
Major Tucker, on receiving the report of Lieutenant Harward, started at once with a small mounted party for the Intombe, followed by 150 bayonets of the 80th, and on his arrival found that the Zulus had retired, carrying off with them the whole of the oxen, small-arm ammunition, rifles, blankets, and every scattered object of value, though, curiously enough, the waggons were only half pillaged.
Of the twenty-one men of the 80th, posted on the left bank of the Intombe, only twelve escaped, and some of those on the right bank also fell; making the total casualties 62 out of 106. Dr. Cobbin, two conductors, and fifteen drivers and leaders belonging to the Transport Department, also perished.
The dead were buried by Major Tucker, where they lay. They had all been stripped by the enemy.