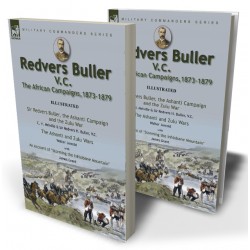 Buller as a fighting soldier in West and South Africa

Redvers Buller was one of the notable British military figures of the later Victorian period. His early career was spent in China and in Canada during the Red River Campaign, but most notably he served in West Africa during the Ashanti War of 1874 under Garnet Wolseley. It was in 1878, once again in Africa, that Buller laid the foundations for his ultimate renown. He joined Major-General Thesiger, later Lord Chelmsford, in company with Evelyn Wood for the Ninth Kaffir War, becoming commander of the Frontier Light Horse. Before long the war with Cetawayo’s Zulus erupted. Buller was notably in action on Inhlobane Mountain, where he won his V.C, Kambula and Ulundi.

This never before available Leonaur book contains two perspectives on Buller’s African campaigns, derived from works covering his entire career. The first benefits from the inclusion of extensive passages from Buller’s own journal and correspondence, which contain essential battlefield descriptions. The second work not only provides a contrasting perspective, but additionally covers Buller’s service during the First Boer War. Historian, James Grant’s account of the disastrous action at Inhlobane Mountain concludes this unique and invaluable history, which also includes many illustrations and maps.

Buller got into touch with Russell, somewhere apparently about 8 a.m. The latter had got as far as the lower plateau of Inhlobana at 7. Viewing the path just described from below he decided that it was totally impracticable for horsemen, and consequently made no attempt to take his party by it to the upper plateau.
Being unable to see what was occurring on that part of the mountain, he sent Captain Browne, 24th Foot, with twenty men of the Mounted Infantry to make their way up on foot and communicate with Buller’s party. This Browne achieved without meeting opposition, and after speaking to Major Tremlett, R.A., and Major Leet, 1/13th Light Infantry, members of Buller’s column, returned with a report that the path was almost impracticable even for men on foot. Buller’s narrative continues:
Well, to my tale. Having collected all the cattle we could find, some 2,000, and finding that the Zulus were becoming every minute more in number, and that it was every minute more difficult to prevent them from mustering on the upper plateau, I proceeded to the east end, sending for my scattered detachments. Arrived there, I sent off Barton, my second in command, down the hill with thirty men. He was to bury Williams and Seitencron, the two officers I had lost, and then he was to return to camp the way we came.” (This was by the south side of the mountain: the time was, according to the official history, nearly 9 a.m. To continue:)
Just after we had seen him safe off, we descried a Zulu Army advancing, some 20,000 men in battle (array), across the plain below us. Our position was this, seen from above (see sketch).
We were 30 miles from camp: our horses had been under saddle since 3 a.m., it was then 10, and they had had nothing to eat really since the previous morning.
I saw that we had not a chance of getting back the way we came, so I at once sent two men after Barton, telling him to return by the right of the mountain. Alas, for the use of careless words! By ‘right’ I meant the north side. Poor Barton, going down the mountain with his back to it (facing east), understood that he was to turn to his right, and so went to the left, or south side, on which was the Zulu impi.
******
Note:—At the same time, a man going west, and told to go “by the right of the mountain,” would, it might be expected, keep to the north side, with the mountain on his left. But as it seems to have been a verbal order, it may have miscarried in the telling.
******
To attack them he called up Colonel Weatherley with the Border Horse, whom he saw on the plain below. They could not get through, but lost many men in the attempt. They then turned and attempted to get back by the path on the north side of the mountain. They were pursued in force. Poor dear Barton and half his men were killed, and Colonel Weatherley and forty-four of his Border Horse were killed also. Barton had been my constant companion since he joined me in July. We lived in the one tent, every day I saw something to like him more for, and he is a dreadful loss. I am still hoping against hope, as no one actually saw him killed, that he may turn up. One of Weatherley’s men came in yesterday, having been two days hidden in long grass.