Suakin, 1885: the Campaign against Osman Digna in the Sudan 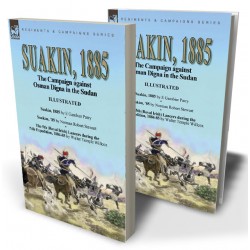 Accounts of side-shows of the War in the Sudan

This book contains three accounts of the battles of the Suakin Campaign of 1885 fought against the Mahdist forces of Osman Digna. The first is a personal account of the British Army special service officer who, notwithstanding he was attached to the Transport and Commissariat, was well known for throwing himself into the heart of the conflict, which he rivetingly describes. Of particular note is detail concerning the Australian contingent which fought in these battles. Perry fought during the Battle of Hasheen and at Tofrek (also known as McNeill’s Zariba) where he was seriously wounded. The second account is another personal account by an officer of the Indian Army and so focusses on the activities of the Indian Contingent which formed a significant portion of Graham’s force. Stewart’s account (excerpted from an account of his total military career) is also full of battlefield detail. The final piece in this special Leonaur edition is an extract from the history of the Fifth (Royal Irish) Lancers and has been included because this regiment had served in the Sudan for some time and so their service gives context to the entire campaign. Whilst the lancers served in Suakin in their conventional role as light cavalry, numbers of the regiment had been seconded for service with the Camel Corps which remains fascinating to students of military history. Contains maps, photographs and illustrations which did not accompany the original texts.

All around seemed quiet; the men continued at their work, and the two small sandbag redoubts at the corners of the zaribas of the 49th and Marines were gradually being completed, when a cavalry vidette came galloping in to tell the general that parties of the enemy had been seen not far off in the bush. The general was asking the man in what force he thought the enemy were, when a second vidette came in telling the same story, that the Arabs were collecting in force round the zaribas. Then suddenly the air was rent with the most frightful yell; the cavalry outposts came clattering in, dashing through the working parties, and a heavy fire was poured upon us from the enemy, who seemed all at once to have sprung out of the earth where but a second before all had seemed so quiet and so still.
There was a cry all round, “Stand to your arms, men!” “Stand to your arms!” but, alas! some of the men were without arms, for they had put them down on the ground while they were toiling away at their work. There was a rush to the partially formed zaribas, and, mixed up together, Englishmen and Indians stood back to back fighting for life against an overwhelming force.
A large body of the Arabs had at the same time attacked the mass of camels and transport animals, who turned round and, like a vast surging sea, came onward towards the zaribas, crashing through the bush, swaying with their mighty weight, and trampling down everything in their course as they swept forward enveloped in a dense cloud of dust, maddened and terrified. The Arabs were among them, hacking, hewing right and left, ham-stringing and ripping up the wretched camels, and cutting down mercilessly the poor miserable native drivers who, unarmed and helpless, were hemmed in and carried onward by the flood. Many of our own men and officers, too, were in this way driven forward, unable to extricate themselves or even to draw their swords. Mules, horses, and camels were huddled into one hopeless mass of inextricable confusion, while the air was filled with the screams of men and animals and the roar of the musketry.
The 17th Native Infantry had possession of this part of the ground, the Marines being on their left. It was on this point that the confused mass of men and animals fell. The 17th were for the moment somewhat scattered, but groups of men stood fast here and there, and poured in their fire, in the general confusion, right into the men and animals in front of them. It was a minute before they were able to form up in any way, and then they fired upon friend and foe at once, and men and animals went down before the leaden hail, killed by our own bullets. But the Marines on the left stood firm as a rock, and it was well they did. The enemy dashed onwards, with almost irresistible impulse, falling in terrible numbers before their well-directed. volleys, and not being stopped until they were actually touching our bayonets. Led by sheikhs carrying white banners inscribed with the Mahdi’s name, they charged again and again, rushing up to the face of the square and engaging our men hand-to-hand.
Many of these Arabs would fall before the rain of bullets, but, picking themselves up instantly, they would dash forward with the rest, till, pierced through and through, they reached the square at last, positively riddled by the fire. It was a supremely awful moment, but the English foot-soldier again proved himself invincible, and stood facing the foe—which outnumbered him ten to one—without a waver and without a move, save to load and reload or drive home the thrust of the weapon in the use of which he ranks before all others. So Arab and Englishman hacked and hewed, and shot and thrust, till blood flowed out on the ground like water, and black and white man alike bit the dust or writhed in death-agony on the hot sands of that parched-up desert.
The 49th zariba was entered by about a hundred and fifty Arabs, as many of the men were, as I have already said, outside, cutting down the bush. Getting their arms as quickly as possible, two companies of this gallant regiment formed rallying squares, and in this formation none of the Arabs could touch them. They did their best with shot and spear alike, led on, as in other parts of the field, by sheikhs carrying banners, on one of which was inscribed the words in Arabic, “Whosoever fights under this banner shall have victory.” So crafty were the enemy in the way they attacked these detached portions of our force, that they got round between them and the zaribas, as they saw that our men would not be able to fire in this direction for fear of injuring their friends. But cold steel did what the bullet was unable to do.
Nothing could have exceeded the coolness and signal bravery of the 49th, as they fought their zariba against overwhelming numbers, who never faltered for a moment in delivering charge upon charge. It was the triumph of perfect discipline, combined with the utmost bravery, over a glorious pluck untutored in the ways of war. Nothing but this saved our force that day. Had there been the least unsteadiness, had there been the slightest hesitation on our side, our force must have been doomed.