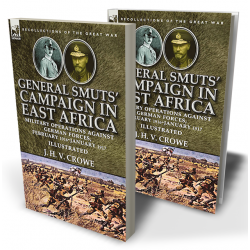 An edition specially enhanced with many photographs and maps

There remains an abiding interest and enthusiasm among many military history students of the First World War for the ‘side show theatre’ campaigns, including that fought in East Africa. The terrain over which these actions were fought is an evocative one that is now part of the great wild life reserves of the region. The troops engaged included regulars from both sides, together with colourful irregular colonists and highly effective African troops. The German commander, Paul von Lettow-Vorbeck, is fascinating to those interested in these campaigns because he fought imaginatively and ably against the odds, revealing him to be a master of his craft. This book, written by a senior British officer who was present throughout the events described, does not cover the entire East African campaign, though a synopsis of those events is included to add context to the principal narrative. The narrative concentrates instead, specifically on the portion of the campaign that came under the command of Jan Christiaan Smuts, who had proved himself to be a capable Boer commander during the Anglo-Boer War, and as a leader of British forces in the Great War. He also commanded in the Second World War rising to the rank of Field-Marshal. This unique Leonaur edition benefits from the inclusion of many photographs, illustrations and campaign maps which did not appear in the original edition. This is a highly readable account which combines a history with first-hand knowledge and includes details of minor actions in combination with insights into larger command decisions, movements and engagements.

On May 7th, the enemy were reported to be within six miles of the camp and our patrols were in touch with their advanced guard.
On May 9th, the enemy occupied all the high ground to the south-east of Kondoa, having driven back our piquets. At about four p.m. they opened fire at long range with a naval 4.1-inch gun. At dusk, they were observed descending the hills to the north of the Dodoma road. At about 8 p.m. they made a determined attack, supported by machine-gun fire, on our centre. They got close to our line, but did not succeed in gaining a footing in the position. At about 10.30 p.m., having gradually worked a force round to the east, they made a strong attack on our left flank, but were driven back.
Meanwhile, they kept up a continuous gun fire with their 4.1-inch and field guns on the village. At 11 p.m. the 12th South African Infantry moved down the valley running to the south-west and threatened the enemy’s left flank. The fighting went on till about half past two, when the enemy withdrew. He had made four determined onslaughts, all of which had been beaten back. Firing had ceased by a little after 3 a.m.
Our casualties were less than fifty. The enemy left over sixty dead on the ground, and many cartloads of killed and wounded had been taken away. We captured a few askaris.
The effect of the defeat was that from this time on, the fighting at Kondoa, so far as the enemy was concerned, was confined to long-range artillery work. As was afterwards learned, Von Lettow, the German commander, had been present. The German losses had exceeded 150, among them several well-known officers. When they retired, they left a considerable quantity of equipment on the ground and ammunition (dated 1915, which had been brought in by the blockade runners). They had tried their usual ruses, shouting “Don’t fire! This is ‘A’ company,” etc. When they made their first big onslaught their war-cry had been “Deutschland über Alles.”
The 11th South African Infantry had borne the brunt of the attack, supported by the 12th South African Infantry. The heavy fire at short range had lasted about eight hours.
After this attack, our forces set to work to strengthen their defences, which had previously been none too formidable. The Commander-in-Chief decided to reinforce General Van Deventer and sent up two battalions, the 7th and 8th, of the 2nd South African Infantry Brigade, belonging to the 3rd Division, and the 1st South African battery. Later he was still further reinforced by the 10th 4-inch Battery and a section of the 38th Howitzer Brigade. These reinforcements reached Kondoa during the last week of May. There was daily artillery bombardment, and the German 4.1-inch guns had been able to outrange any guns that we had there till the 4-inch battery arrived. From this time, onwards, there was constant outpost and patrol work, but the enemy did not attempt another serious attack and our guns could more than hold their own.
On May 18th, a report was received that the 10th South African Infantry with the 28th Battery had occupied Mbulu. The casualties had been very light. These troops were then ordered forward to Kondoa, and a squadron was left at Mbulu with orders to patrol towards Mkalama, Ssingida, and south of the escarpment.
An advanced depot was ordered to be formed at Ufiume. The rains were getting lighter, and the roads were consequently improving. The new road from Moschi to Lol Kissale, which was now working, considerably shortened the distance.